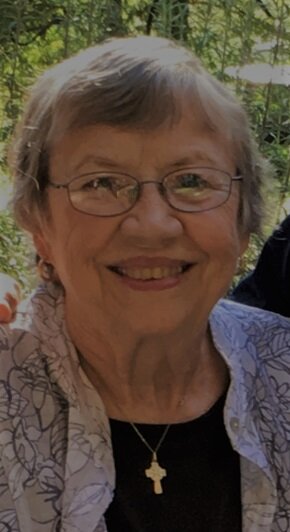 Rosanne Mary Finley Sneddon passed away peacefully on January 12, 2022. Her daughters, LuAnne and Amy, were with her. A natural teacher, she influenced and taught thousands of young people, both in and out of the classroom. Always with a positive word or thoughtful note, she inspired confidence in those with whom she interacted and left people feeling better about themselves. Her favorite word was Joy and she built a life in that spirit.

Rosanne was born on March 23,1936, in La Crosse, Wisconsin, the oldest of Mary Broghammer and Bernard Joseph Finley’s five children. She grew up among her Dad’s family in southeastern Wisconsin and visiting her mother’s family on a South Dakota farm – and throughout her life continued to build and strengthen connection with her relatives.

Prior to starting high school, the family moved to Lafayette, Indiana, where Rosanne attended Jefferson High School. Following graduation, she attended Marquette University where she earned a B.A. in Education. She began her long teaching career in the Milwaukee Public Schools.

Soon after graduation, Rosanne met John Sneddon in Milwaukee at her cousin’s wedding when they were paired as wedding attendants. Although she was engaged at the time, Rosanne fell quickly for John (and vice versa) and they were married on February 20, 1960. By late 1964, they had welcomed two daughters – LuAnne Mary and Amy Marie.

Rosanne returned to teaching when John’s career took the family to Glen Ellyn, Illinois. During her decade of teaching at St. Petronille Catholic School she taught in most grades, from first to eight. Known for her patience with her students and outstanding dedication to her craft, she has been described as the “favorite” teacher by many of her former students. Her teaching career continued as the family moved, to St. Matthew and St. Pius Catholic Schools in Indianapolis and St. Jean Vianney and Redemptorist Catholic Schools in Baton Rouge. Always focused on Catholic elementary and middle school, she often said that she preferred teaching middle school.

Rosanne took pride in building new friendships during the family’s moves, while continuing to maintain connections from throughout her life. She and John were known for calling friends from across the county on their birthdays to serenade them with “Happy Birthday.” Their friendships in Glen Ellyn, as part of the “rat pack” or “terrible ten” were especially treasured, and they enjoyed regular getaways with and visits from their Wisconsin and Baton Rouge friends. John and Rosanne retired to Diamondhead, Mississippi where together they volunteered with the Lions Club, the Food Pantry, and active members of Most Holy Trinity Catholic Church. Rosanne continued her work with young people as a volunteer at Lynn Meadows Discovery Center in Gulfport, Mississippi, with summer programs at her new home in Diamondhead, and as a popular tutor.

An avid reader (and particular fan of mysteries), Rosanne was involved in Book Clubs wherever she lived, frequently joining more than one at a time. A fan of Jeopardy and crossword puzzles, she shared love her love of language with her daughters and granddaughters. Rosanne especially loved being a grandmother, “Gramma”, to her four granddaughters.

Rosanne is loved and missed by many, including her daughters and sons-in-law, LuAnne and Don Pendergraft, of Chapel Hill, and Amy and Neal McKnight of Chicago; four granddaughters, Finley and Abby Pendergraft and Lucie and Helen McKnight; and two brothers and sisters-in-law, Patrick and Judy Finley of Fort Wayne, Indiana, and David and Geri Finley of North Aurora, Illinois; sister-in-law, Barbara Larsen of Stevens Point; nieces, nephews, and innumerable friends from across the country. She is predeceased by her husband of 61-years, John, and her sisters Mary Clare Redinbo and Kathleen Ross.

A celebration of her life is being planned for a later time in Milwaukee where she and John will be interred. Donations in Rosanne’s name can be sent to Port Discover Northeastern North Carolina’s Center for Hands-On Science, 611 E Main St, Elizabeth City, NC 27909; www.portdiscover.org