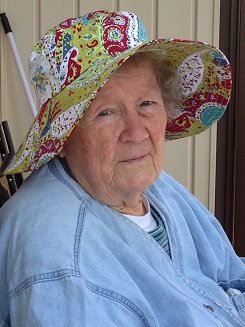 Mae Gertrude Edmonds Freeman, 94 , of Hillsborough, NC died at home after several years of declining health, surrounded by family on May 27, 2019.

Gertrude was born August 18, 1924 in Stokes County, NC.  She moved to Orange County in childhood with her family to raise tobacco. She married Calvin Freeman in 1944 and settled in the Orange Grove community where she lived the remainder of her life. Gertrude worked at several public jobs during her life, but her greatest love was working in her flower gardens. She was the happiest when she was outside with dirt under her fingernails.

Walker's Funeral Home of Chapel Hill has been entrusted to care for the Freeman family.

Please express your online condolence by using the tab below.

To plant a tree in memory of Gertrude Freeman, please visit Tribute Store
Thursday
30
May

Share Your Memory of
Gertrude
Upload Your Memory View All Memories
Be the first to upload a memory!
Share A Memory
Plant a Tree