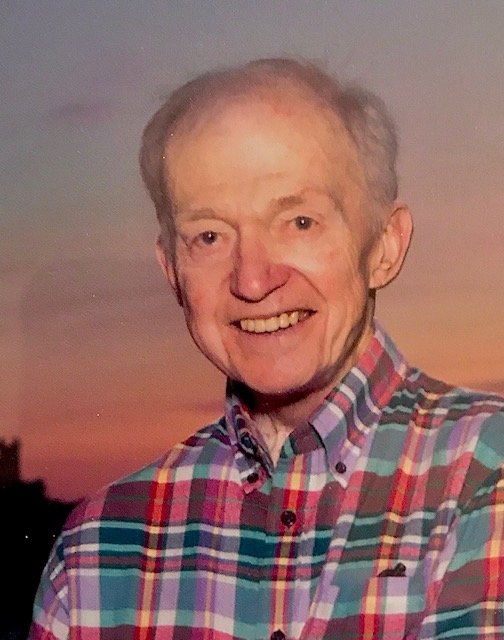 Please share a memory of Douglas to include in a keepsake book for family and friends.
View Tribute Book

Doug was born on November 6, 1935 in Bowling Green, Kentucky to the late Agnes Watkins Shrader and William Wesley Shrader, a former pastor of University Baptist Church in Chapel Hill.

The family moved to Lynchburg, Virginia, where Doug attended E.C. Glass High School and graduated from Fork Union Military Academy in 1954. He enrolled at Yale College, New Haven, Connecticut, and married Anne Royall in 1959. Doug graduated Yale College in 1961 and Yale Law School in 1964.  After clerking for a Connecticut federal judge, Doug joined the law firm of Goldstein and Peck in 1965. In 1971, he became a founding partner of the Connecticut law firm Zeldes, Needle & Cooper, where he practiced until 1998. He then established the boutique firm of Shrader and Knapp, with partner Beverly Knapp, in Westport, Connecticut. Doug retired from the law in 2010, when he and Anne relocated to Chapel Hill.

Doug was an accomplished plaintiff’s trial attorney, an early inductee into the American Trial Lawyers Association, and a champion of social justice and civil rights. In the early 1960s he moved with his wife and children to Mississippi to help organize voter registration and document human rights abuses. Throughout his life Doug was active in local, state and national Democratic Party politics, serving as campaign manager for Westport, Connecticut First Selectmen and, later, Connecticut state campaign manager for presidential candidate Gary Hart. In retirement, he continued his passion by teaching the popular “The Supreme Court in the Twenty-First Century” course at the Osher Lifelong Learning Institute (OLLI) at Duke University. Doug loved to tell stories, play golf, and watch the New York Giants win on Sundays.

Doug joins his beloved wife, Anne, who died in December. He is survived by his daughters, Elizabeth and Ellen, two sons-in-law, four granddaughters and three great-grandchildren.

The family plans to hold a memorial service when coronavirus restrictions on travel and gatherings are lifted. In the meantime, the family would greatly appreciate it if Doug’s family, friends, and colleagues would share their thoughts and anecdotes on the L. Douglas Shrader Memorial Page hosted by Walker’s Funeral Home of Chapel Hill.

Share Your Memory of
Douglas
Upload Your Memory View All Memories
Be the first to upload a memory!
Share A Memory