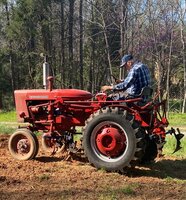 Bruce F. Ray (Buddy), passed away on January 7, 2023 after a courageous battle with lung cancer, in the home he built surrounded by his wife of more than 52 years and his family who loved him greatly. Born on June 21, 1949 in Orange County, NC and better known as Buddy, he built his life on his family’s land where he was most content. He was known for his gentle soul and kindness shown to many.

He is survived and will be missed by his loving wife, Brenda, and his children Crystal (Kenny) Armstrong of Hurdle Mills, Cheryl Ray of Graham, and his granddaughter Skylar Humphrey. He also leaves behind two family dogs that also thought the world of him and loved all of his extra treats from his meal plates.

Buddy’s death was preceded by his father Newton “Newt” Tucker and his mother Frone Tucker (of Hurdle Mills, NC). His biological parents were the late Bobby & Ollie Ray (of Hillsborough, NC)

He graduated from Orange High School class of 1968. He worked his full life perfecting his trade as a skilled electrician. Responsible for residential and commercial projects small and large, he assisted and inspired others to learn the electrical trade. He was a very accomplished electrician practicing the trade for his own company Raco Electric Company and for Vaughan Electric Co. Inc.

He enjoyed watching westerns and sports, tinkering on his tractors and family time. He had an unquenchable thirst for knowledge and history and a mind that would retain it all.

A graveside service will be held on Thursday, January 12th at 3 PM at Mars Hill Baptist Church with a time for gathering with the family afterwards. Walker’s Funeral Home in Hillsborough is assisting the family.

There are no words that can express how grateful and blessed we are to our dear friends who were there for us during his declining health. He was a good man who made a difference in the lives of many and who will be remembered for his kindness. Also a heartfelt thank you to the members of Mars Hill Baptist Church for their support, prayers and love during this time.

His memory will be cherished and his hard working legacy will live on. A scholarship account has been established in his honor to assist others who have the ambition to learn the electrical trade. Donations can be directed to an account established with Local Government Employee Credit Union that account number is 40410516.