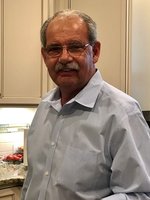 He was born in Nicosia, Cyprus in January 1950, to Christos Loullis of Cyprus and Aspasia Zervas of Athens Greece.
Costas spent his early years on the sunny island of Cyprus and traveled to Ireland to begin his professional education. He continued his education and graduate studies in the United States at Syracuse University where he received his Ph.D in Neuroscience and at the Indiana University School of Medicine with post-doc work in Neurochemistry.

Costas was a consummate professional who studied, worked and paid attention to every aspect of his work as a neuroscientist. His career led him from scientist to multiple executive positions leading Research & Development and Product Development in Biotechnology companies. Eventually he formed his own company and consulted in the pharmaceutical industry with drugs, biologic, botanicals and supplements for over 20 years.

He continued to work and live in the United States for the past 50 years. Career moves led him to New York and California and finally to North Carolina. He has lived in the Chapel Hill / Durham area of North Carolina for the last 15 years.

Costas was also a loving and loyal friend who touched everyone around him with his willingness to help. He could be counted on to be there for a ride to the airport or to the hospital or for a celebration. He didn’t miss a chance to join friends and family for a special celebration or just a gathering and could be often seen by the grill cooking or serving his favorite dishes. He rarely missed a chance to watch and comment on European soccer with a good friend or to discuss the latest medical research. He also loved to listen to his large collection of Greek music and occasionally to dance to it.

He is survived by his loving partner, Sherrie Nance of Durham, his sister, Helen Sgouros of Chapel Hill, his nephew Alexis Sgouros (Marnie) of Denver, his step-son Jonathan Ruffus (Annie) of Hampton, New Hampshire, his cousin Helen Mangones (Reynold) of New York as well as his nieces Tania Mangones (Frank) of New York and Andrea Mangones (Andrew) of Arlington, Virginia.

A Memorial gathering will be held Thursday, June 24 at 11am at the Chapel Hill Memorial Cemetery, 1721 Legion Rd in Chapel Hill. Arrangements are made by Walker Funeral Home.
In lieu of flowers, donations may be made to the Duke Hospice (Hock Family Pavilion): Duke HomeCare & Hospice, Office of Development, 4321 Medical Park Dr, Suite 101, Durham, NC 27704.