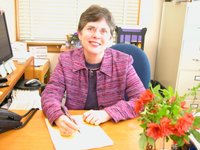 Barbara Burns Moran, loving wife and mother, passed away at age 75 in her home in Chapel Hill, North Carolina, in the company of her family on May 2, 2020.

Barbara was born in Columbus, Mississippi, and grew up in Roanoke, Alabama.  She graduated from Mount Holyoke College in South Hadley, Massachusetts.  Subsequently, she earned an MLS from Emory University in Atlanta and a Ph.D. from the State University of New York at Buffalo.   She was a long-time member of the faculty of the School of Information and Library Science at the University of North Carolina at Chapel Hill.  She was a beloved teacher and mentor, served as Dean for seven years and again as interim dean, authored numerous publications, and was named its first Louis Round Wilson Distinguished Professor.

Barbara was a member of the Newman Catholic Student Center Parish at the University; she served the parish community in many capacities including a term as Chair of the Parish Council.  In addition, she served on several advisory boards within and outside the University.

Barbara was known for her optimism, energy, and curiosity.  Her love of travel took her to over 35 countries, many more than once.  She was an avid reader by any standard.  Although she read on most any and every topic, she had a special love of English Literature.  As busy as she was, she completed the New York Times crossword puzzle nearly every day.   Most of all Barbara was known for caring for her family, friends, students, and colleagues.  If it can be said of anyone, it can be said of Barbara that she made a friend of everyone she met.  Please click on the link Remembering Barbara on the left, for more about Mrs. Moran.

Barbara was preceded in death by her parents, Robert and Joan Burns.  She is survived by Joseph J. Moran, her husband of 54 years; her son Michael Moran of Asheville, North Carolina, his wife Maureen, and their children Jacob and Katherine; her son Brian Moran of Asheville, North Carolina, his wife Ashley, and their children Madison and Molly; her sister Patricia B. Taft; her sister Susan B. Borders; her brother Robert H. Burns; and several nieces, nephews, and cousins.

Funeral arrangements with Walker’s Funeral Home in Chapel Hill are limited because of the covid-19 pandemic.  The time and date for her funeral Mass at the Newman Center will be forth coming as the pandemic is resolved.  In lieu of flowers, donations may be made to: Moran Global Fund in the School of Information and Library Science at UNC-Chapel Hill, P.O. Box 309, Chapel Hill, NC 27514-0309.