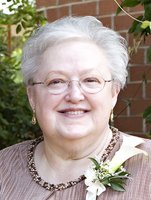 Audrey Louise Turner Burkes died peacefully surrounded by her family on January 1, 2020, at Duke Medical Center in Durham, NC, after complications from a fall.

Audrey was born on September 18, 1937, in Columbus, OH. She was preceded in death by her parents Arch Turner, Sr., and Edith Turner and her brothers, Charles Turner and Arch Turner, Jr. She is survived by her husband of 56 years, Marshall R. Burkes, and her children Marshall M. Burkes and Ardith Burkes, son-in-law John Kasprzak, and cherished grandson Quinn, as well as many family members in Ohio. Audrey deeply loved her family pets, including her beloved dog and constant companion Chloe, who survives her.

She received her undergraduate degree from Ohio State University, where she was a member of Kappa Delta Sorority. She then became one of the first women to receive an MBA from Ohio State. She and Marshall moved to San Francisco, CA, where they were married in 1963 and she worked in real estate research. In Washington, DC, she began her long career in education administration starting as registrar at Holton-Arms School. In Madison, WI, she was executive director of the Wisconsin Association for Talented and Gifted, and then in Chapel Hill, NC, she was a program manager at The University of North Carolina in the School of Social Work. She retired in 2007 after serving as church administrator of Holy Trinity Lutheran Church in Chapel Hill. Audrey also served her community by volunteering at her children’s schools and the Chapel Hill Service League.

Audrey hoped that how she lived her life would leave this earth a better place. She will be laid to rest at a family ceremony at Sunset Cemetery in Columbus. In lieu of flowers, donations in her memory may be made to Second Chance Pet Adoptions (secondchancenc.org) or your local no-kill shelter.

The Burkes family is being assisted by Walker's Funeral Home of Chapel Hill.