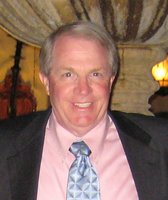 Bob was born on December 19, 1945 in Winston Salem, NC to his parents, Robert Clark Myer and Mary Edwina Havens.  Bob graduated from University of Maryland, College Park with a business degree.  He was a proud veteran of the United States Marine Corps.  He served as a first lieutenant in the Corps and led a platoon in the Vietnam War.   A highlight from his career was when Bob applied a battle dressing to then Captain and later US Marine General Tony Zinni who wrote: ‘Bob was a good man, and capable’ and ‘He was a great marine and patched me up under fire.’

Bob married Judy Cheryl Morgan in 1972 in Virginia Beach, VA.  They moved shortly thereafter to Gaithersburg, MD, where Bob was employed with COMSAT (Communications Satellite Corporation).  He enjoyed a lengthy, successful career with COMSAT, and later retired from Lockheed Martin as a Vice President of Finance and Operations.

Bob and Judy raised two boys, Gregory and Andrew.  Upon his retirement, Bob and Judy moved to Fredericksburg, VA where they lived in the Fawn Lake community.  In 2017, they moved to Chapel Hill, North Carolina to be closer to their son, daughter-in-law, and grandchildren.

Bob loved to play golf and watch University of Maryland college basketball.  He enjoyed spending time with his family, traveling with his wife on bus tours and cruises, and attending social functions with friends.  He had a passion for genealogy and traced his family heritage back to the Mayflower voyage and the Renaissance.

Bob deeply loved his family and close friends, including his golden retriever, Tessa.  In lieu of flowers, the family request donations be sent to K9s for Wounded Warriors ― k9sforwarriors.org or The Salvation Army ― salvationarmyusa.org in Bob Myer’s name.

The Myer family is under the care of Walker’s Funeral Home of Chapel Hill, NC.