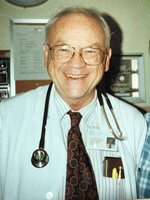 James Hutton McCutchan, age 87, went peacefully to be with the Lord on August 22, 2019. He died at his residence at Carolina Meadows, just outside Chapel Hill, North Carolina.

Dr. McCutchan was born August 18, 1932, in Salisbury, NC, to Frank and Mary Ryburn McCutchan.  He grew up in Salisbury along with his older brother, Frank, Jr., and his younger brother, Arthur Dixon. After contracting polio at age 17, he went to Warm Springs, Georgia for rehabilitation. Dr. McCutchan attended Princeton University, where he studied philosophy and chemistry. After he graduated from the Johns Hopkins Medical School, he completed a fellowship in infectious disease at the University of North Carolina, Chapel Hill. He later joined the Department of Medicine at UNC, where he met his wife, Ann. Dr. McCutchan conducted primary research at UNC, including research on poliovirus, and worked for most of his career as a clinician at the UNC Student Health Service. He retired as Assistant Director of SHS in 2003 and continued to work in the lab there until 2010.

Dr. McCutchan and Ann were married in 1965 in Chapel Hill, where they raised their two sons, James (Jimmy) Hutton McCutchan, Jr. and Frank Hoke McCutchan. In spite of his physical limitations as a result of poliomyelitus, Dr. McCutchan enjoyed the outdoors and had many hobbies. He loved the water and spent much of his free time boating and fishing with Ann (sometimes reluctantly) and his sons (more enthusiastically). He was a talented photographer and enjoyed woodworking, reading about history, and reading and writing poetry. He also was an active member of Aldersgate United Methodist Church, singing tenor in the choir and serving on the pastor-parish relations committee.

Dr. McCutchan had a remarkable memory and told stories about growing up during the Depression, medical school, work at UNC, and countless other subjects. He will be remembered by his family and friends for the wonderful stories he told and also for his honesty, generosity, patience, and quiet determination.

He is survived by his wife Ann, his two sons, Jimmy and Frank, two daughters-in-law, Reneé Riccio McCutchan and Cheryl Lynn McCutchan, four grandchildren, Jacqueline Ann, Kathleen Marian, Frank Richard, and Meghan Elizabeth, and his brother, Frank. He is preceded in death by his parents, Frank and Mary Ryburn, and his younger brother, Arthur Dixon.

His family and friends offer special thanks to the entire staff at Carolina Meadows for the outstanding care he received over the past year.

The McCutchan family is under the care of Walker’s Funeral Home of Chapel Hill.  Please express your online condolence, memory, or story by using the tab below.