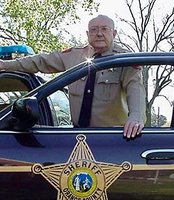 Albert Lindy Pendergrass of Chapel Hill NC died at Duke University Hospital, surrounded by his family and close friends on May19th, 2019 at the age of 85 years old.

Lindy was known for his tenacious work ethic and for his uncompromising love for his family, profession, friends and the community of Orange County.

These characteristics began at a very young age as he began working to help support his family during very tough times in the 1940s for various businesses throughout Chapel Hill and Carrboro. This is where he developed his reputation in the community by both town and gown.

After service in the Marine Corp he began his career with the Chapel Hill Police Department led by the late Chief W.T. Sloan. Chief Sloan was very impressed by his reputation and tenacious work ethic and hired him in late 1956, this is where his law enforcement foundation began.
Many times he said he was so grateful to have been influenced and led by great law enforcement minds such as Chief W. T. Sloan, Chief William Blake, Chief Herman Stone, and Major Coy Durham.

As a young officer he realized the need to continue education within his field. He is a graduate of many national and state law enforcement  academies such the Bureau of Narcotic and Dangerous Drugs, now known as the DEA and the FBI Academy.

His career began as a patrol officer, walking the streets of Chapel Hill continuing to form relationships with community business owners and citizens. He was promoted to the Detective Division excelling to the rank of Major. In 1982 he decided to pursue his life long dream of becoming the Sheriff of Orange County. He was elected and was grateful to the citizens of Orange County for giving him their trust.

He was commended often how he, Major Don Truelove and his new command staff transitioned the existing Sheriffs Department in 1982, into a modern state of the art department which continued to grow and modernize throughout his tenure.

He realized the need to continue the education of the Department beyond basic law Enforcement Training, which meant sending many deputies to law enforcement academies just as he was fortunate to have attended.

Lindy built many trusted relationships with judges, attorneys, prosecutors and sheriffs across the state. He became the President of the NC sheriff’s Association and President of the NC Training and Standards Commission. He was also granted the prestigious Order of the Long Leaf Pine in 2014 by Governor Beverly Perdue.

The family would like to acknowledge Duke University Hospital for their care and compassion shown to Lindy and extended to his family during his illness. In lieu of flowers please send contributions in the name of Lindy Pendergrass to St. Jude’s Children’s Hospital or the Lindy Pendergrass Scholarship fund: Sheriff's Office Citizens Organization (SOCO) 106  E. Margaret Lane, Hillsborough, NC 27278 Attn: Carolyn Cates.

Walker's Funeral Home of Chapel Hill has been entrusted to care for the Pendergrass family.