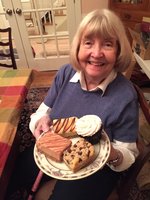 Elizabeth Ann Wheaton, known as Betty by the many who loved her, was born in Melrose, Massachusetts on February 25, 1928.  After 25 moves and over 90 years of making others smile, Betty finally moved to a permanent, heavenly address on October 1, 2018.

Betty graduated from Fryeburg Academy, in Fryeburg, Maine, in 1947.  She had planned on attending nursing school.  However, soon after graduation, Betty met Bob, and immediately lost all interest in nursing school.

Bob and Betty eloped on Labor Day Weekend, 1949.  They decided to keep the marriage a secret from their families until Bob was able to graduate from college and secure a decent-paying job.  Therefore, they lived at their respective parents’ homes, and stole away whenever possible on the weekends – donning their wedding rings so that they could present themselves to the public as husband and wife.  At the end of the weekend, they would remove their rings and revert to their undercover state.

This ruse lasted for several months until Betty inadvertently revealed the secret to her parents.  Betty’s mother immediately insisted on a “proper” church wedding, so a follow-up ceremony was arranged for February 25, 1950, in Malden, Massachusetts.  Then, the two-time newly-weds began a happy 63-year journey together as Mr. and Mrs. Wheaton.

Over the intervening decades, Bob advanced rapidly through the ranks of the corporate world, and Betty managed their happy home, which was blessed by the birth of two children.  Her greatest loves were family, friends, laughter, numerous pets, cooking, gardening, and dancing.

The family moved several times during Bob’s career, including to Haddonfield and then Summit, NJ, and to New Canaan and then Avon, CT.  Bob retired as a senior executive in 1988 so that he and Betty could spend their remaining years in happy retirement.  They moved to Chapel Hill, NC in 2004.

The family is deeply grateful for the loving care extended by the staff at Carol Woods’ Health Center, and Brookdale Meadowmont, both in Chapel Hill, NC, during the final 3 months of Betty’s life.

Online condolences can be made at www.walkersfuneralservice.com

Walkers Funeral Home and Crematory of Mebane, is in charge of the arrangements.