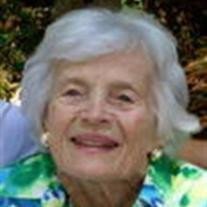 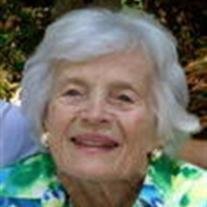 Please share a memory of Thelma to include in a keepsake book for family and friends.
View Tribute Book
THELMA HICKLIN BOYD Chapel Hill, NC Thelma Hicklin Boyd, 91, of Carol Woods Retirement Community, Chapel Hill, NC, died Friday, September 2 2011. Thelma was born on May 4, 1920 in Richburg, SC to Ira Kell Hicklin and Helen McRae Hicklin. She was the eldest of five children, having three sisters, and one brother. Thelma graduated from Winthrop College in 1941. While working as a director of Christian education in Clinton, SC she met and married Bernard H. Boyd, a professor of Religion at Presbyterian College. During World War II she worked with the American Red Cross attached to the Navy in California and Florida. After the war, they moved to Davidson, NC where Dr. Boyd taught Bible at Davidson College. In 1950 they moved to Chapel Hill, NC where Dr. Boyd was a Professor of Biblical Literature at the University of North Carolina. In Chapel Hill Thelma was active in many civic and service organizations, including the Junior Service League, University Women's Club, Inter-Faith Council, Meals on Wheels and, in the early days, on the Board of Carol Woods. She was a fifty-year volunteer at the UNC Hospital. Thelma was an active and supportive member of the University Presbyterian Church, serving on many committees and as the first woman Elder. She also served on the National Theological Education Committee. An avid and talented gardener, she was a member of the William C. Coker Garden Club. Thelma was predeceased by her parents; her husband, Dr. Bernard Boyd; an infant daughter, Linda; brother, Robert Hicklin and sister Lou Nation. She is survived by her children, Don Boyd of Chapel Hill, NC; Karen Boyd Jones and husband, Tom, of Macon, GA; her sisters Pat Baumann and Billie DePuy both of Martinsville VA. She is also survived by grand-children Catherine Moore and husband Benjamin of Alpharetta GA, and Allison Jones of Herndon VA; great-grandchildren, Spencer and Audrey Moore; and many nieces, nephews, and cousins. Thelma Boyd was an outgoing, charming and generous person. Within minutes of meeting anyone she would know their name, where they grew up and lived and probably knew someone they knew. She entertained hundreds of students in her home, giving one and all a full measure of Southern Hospitality. A Memorial Service will be held on Monday, September 12 at 2 o'clock at The University Presbyterian Church, 209 East Franklin Street, Chapel Hill NC, Pastors Robert Dunham and Anna Pinckney Straight officiating. A reception in the church fellowship hall will follow the service. Memorial gifts may be made to University Presbyterian Church; Carol Woods Charitable Fund: Resident Assistance Fund, 750 Weaver Dairy Road, Chapel Hill NC 27514; or a charity of your choice. Condolences may be mailed to Don Boyd, PO Box 882 Chapel Hill NC 27514, Karen Jones, 1102 Newport Road Macon GA 31210.

Share Your Memory of
Thelma
Upload Your Memory View All Memories
Be the first to upload a memory!
Share A Memory