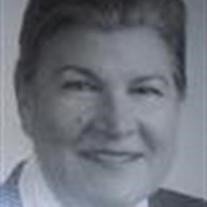 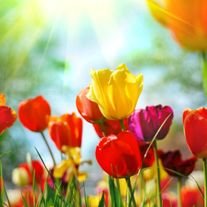 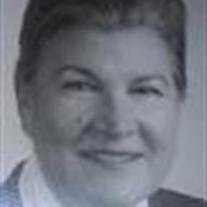 Eunice Patten Jones passed away peacefully in her sleep September 10, 2011. Eunice was married for 68 years to her beloved, Dr. J. Kempton Jones, who resides at the DuBose Center at The Cedars, Chapel Hill, NC. She was born November 10, 1920 in Greenville, NC. She will be remembered as an elegant, beautiful, and gracious woman. Eunice was a rare combination of southern lady and northern reserve. Although Eunice lived almost all of her life in North Carolina, both her parents Walter and Sarah Patten came from New England. From her northern ancestors, she developed a stubborn streak as well as a pension for thrift that thwarted any attempts to spoil her. She was foremost a proud Chapel Hillian and loved to introduce newcomers to its history and lore. The Joneses always opened their home to friends, family, and animals. More than once she had to retrieve her famed dog George from demonstrations in the '60's. She had a knack for taming stray cats and reviving plants. She was compassionate and generous to her friends, which she chose carefully. As one friend describes her: "She was a wonderful rememberer of the ins and outs of living - not one to sweat the small stuff and quick to find the saving humor in what comes in the everyday and over a lifetime... She was great company - the highest praise I can think of." Her's was a life well lived with memories of friends and beautiful places where she travelled. With an adventurous spirit, she was especially excited to view abroad her favorite art of the Renaissance period; she was a wealth of knowledge about art history. Quite a talented painter and sculptor herself, regretfully she did not pursue this after college. Instead, she developed a fine appreciation for all the arts which she loved sharing with others. Not to mention her fondness for the 40's Pop Hits and Big Band music. Her singing voice was harmonious and her dance step, smooth. She could never get enough of those old movies either! She loved the beauty of nature, as seen by her collection of shells displayed carefully in her home. Eunice studied at Salem College and graduated from UNC in 1941 as a Pi Beta Phi girl. She briefly worked as a medical records librarian while Kemp was in Duke Medical School. She later was a medical secretary to Dr. Leige Menefee and Dr. William Nicholson. In their enjoyment for watching sports, they carried a fond rivalry between UNC and Duke throughout their life together. She was a loyal member of the UNC Alumni Association. As Eunice matured, she was rather independent and private, appreciating her solitude. At the same time, before she passed away she was increasingly connecting with the community at The Cedars, where they lived since 2004. Her friends saw her as thoughtful, kind, and loyal. Kemp describes her as having been an agreeable companion. Eunice is predeceased by her daughter Liz who passed away June 10th, 2004. Besides her husband Kemp, she is survived by her son Gordon of Lake Forest, Illinois, who with his wife Kate gave her 6 grandchildren and 6 great grandchildren, and by her daughter Connie, married to Paul Dunion and living in N. Franklin, CT. Her brother Brooks still heads the Patten clan in Lake Junaluska, NC. A memorial service will take place at 12:30 PM on Tuesday December 27 at the Cedars with the Reverend Walter Patten, her nephew, officiating. A reception will follow. In lieu of flowers, memorials may be made to the Pulmonary Hypertension Fund or the University United Methodist Church of Chapel Hill. Condolence cards may be sent to Dr. Kemp Jones, 213 Cedar Club Circle, Chapel Hill, NC 27517.

Share Your Memory of
Eunice
Upload Your Memory View All Memories
Be the first to upload a memory!