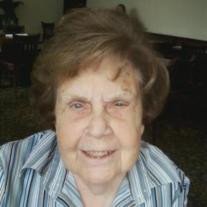 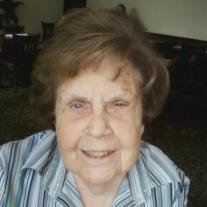 Please share a memory of Hazell to include in a keepsake book for family and friends.
View Tribute Book
PITTSBORO -Hazell Marrie Barr Vassar passed away Wednesday ,November 30, 2011 at UNC Hospital following a brief illness. She was the daughter of the late Theodore Clifton Barr and Maude Eva White Barr of Portsmouth Virginia. She was married to the late John Dixie Vassar, Sr. of Craigsville, Virginia. They were longstanding residents of Virginia Beach, Virginia, until they moved to the Pittsboro, NC area seven years ago. The couple was married 62 years. In her early life she was an accomplished singer and dancer in local productions. During the WWII years she had a "war job" at the Portsmouth Naval Shipyard and as a secretary to the president of the Colonial Store grocery chain. After the war she married the love of her life, John Dixie Vassar on June 20. 1948. She was a devoted mother to her three children. Hazell enjoyed helping others and loved spending time with her grandchildren. She was a long standing member of the First Baptist Church in Virginia Beach. Hazell is survived by her son John Dixie (Karen) Vassar of Columbia, MD.; son, Lance M. (Deborah) Vassar Apex ,NC.; daughter, Tina M. Vassar, Durham, NC; grandchildren, Kathryn Vassar)Columbia, MD.,Brooke and Ashley Vassar of Apex. She is also survived by her sister-in-law Jackie Barr, Chesapeake, VA; brother-in-law James Williams of Kinston, NC; sister-in·law Virginia (George) Field Charleston, SC; and several nieces and nephews. Funeral services will be held at 2:00pm Saturday, December 3, at Walker Funeral Home Chapel by the Rev. Woody Massey. Committal services will follow in the Chapel Hill Cemetery. Visitation will be held Saturday, December 3rd from 1:00 to 1:45 pm in the funeral home. In lieu of flowers send memorial gifts UNC Hospitals Department of Pastoral Care. They are presently renovating the hospital chapel. Make checks payable to: Medical Foundation of North Carolina, Inc. Pastoral Fund, and designate: Chapel Renovations. Mail to UNC Hospitals Department of Pastoral Care 101 Manning Drive Chapel Hill, NC 27514. Walkers Funeral Home of Chapel Hill, 120 W. Franklin Street, Chapel Hill, is assisting the Vassar family.

Share Your Memory of
Hazell
Upload Your Memory View All Memories
Be the first to upload a memory!
Share A Memory