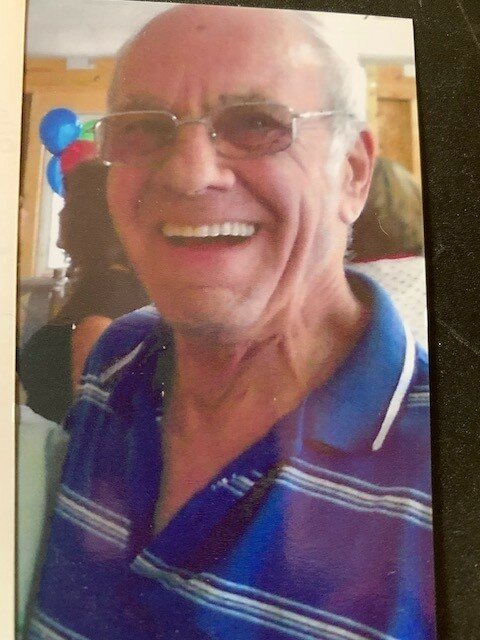 Please share a memory of Jimmie to include in a keepsake book for family and friends.
View Tribute Book

Jimmie Allen Sigmon was born February 26th, 1938 to John Troy Sigmon & Addie Mace Sigmon and was one of ten siblings. He was lovingly married to Carrie Sigmon on February 22nd, 1959 and were together for 56 years before Carrie passed. Jimmie worked at White’s Furniture Company before retiring, and had two children, Cindy & James.

Jimmie was a kind soul, and was well-loved and respected by his friends and family. He was quite handy, and was regularly tinkering with his lawnmower or working on some other project around the house, but if he wasn’t working, he would be spending the afternoon on his front porch with his cat Tabby. You could often find Jimmie down the street at his favorite hangout, “The Pitstop”, playing darts or pool with friends and drinking a Coca Cola, which he enjoyed spending quality time with his friends rather than the games themselves. He also loved spending time with his family, whether that was going to White Lake on vacation or having his grandson, Tripp, over at his house to spoil him with lots of treats and quality time gathering apples from the old apple tree in the backyard.

Jimmie is survived by his daughter and son-in law, Cindy & Chip Hamilton of Burlington, his son and partner, James Sigmon & Roger Mathena of Raleigh, grandson and grand-daughter in law Tripp & Rashelle Hamilton of Raleigh, and four great-grandchildren, Sophia, Everett, Violet, & Salem. Additionally, he is survived by three of his siblings, Margret Lane, Daisy Sechrist, & Dan Sigmon who all reside in Hillsborough.

A public viewing will be held at Walker’s Funeral home on Thursday, January 12th, 2023 after 2PM at 204 N Churton St, Hillsborough, NC and a graveside service will be on Friday, January 13th, 2023 at 2PM at the Hillsborough Town Cemetery. Pastor Dale Morgan will be officiating the service.

In lieu of flowers, please make donations in Jimmie’s honor to the Alzheimer’s Association or the Hospice Foundation.

Share Your Memory of
Jimmie
Upload Your Memory View All Memories
Be the first to upload a memory!
Share A Memory