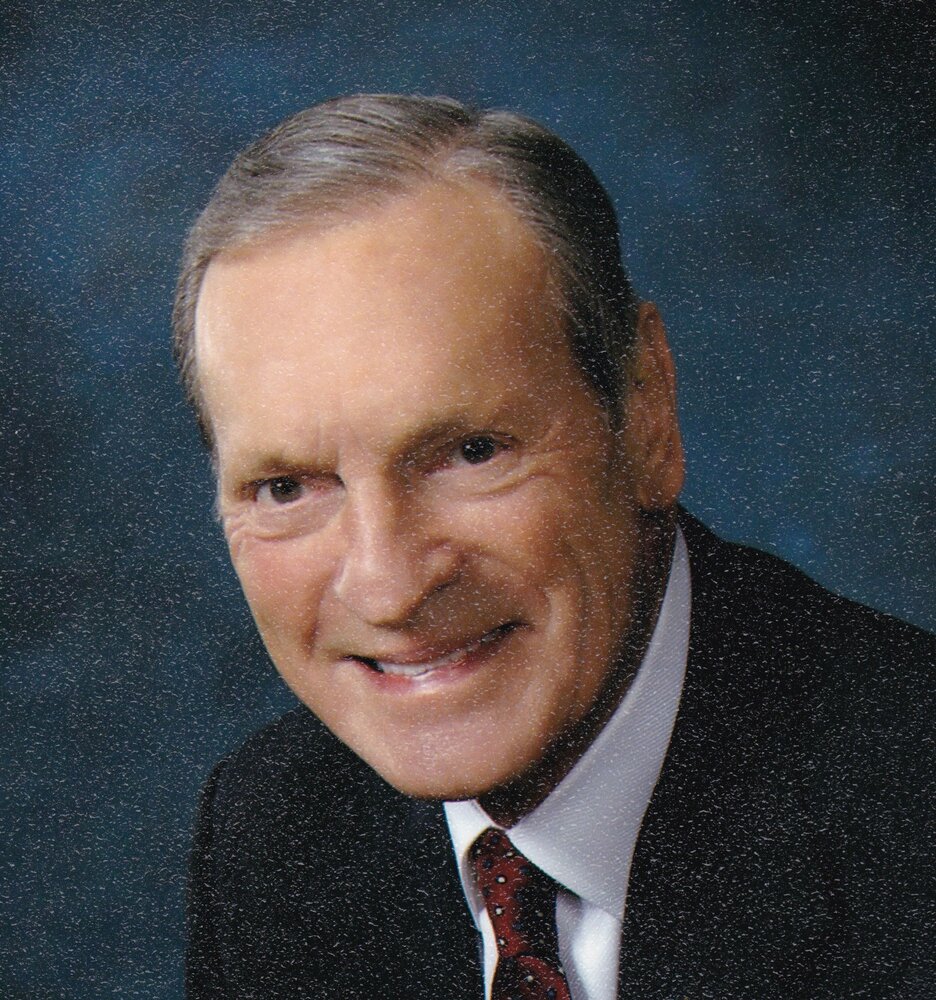 Please share a memory of William to include in a keepsake book for family and friends.
View Tribute Book

William O. McCoy, 89, died peacefully on Christmas Day, December 25, 2022, after a progressive illness. His closest family was by his side at home at The Cedars in Chapel Hill, North Carolina. His wife, Sara, died December 18, last year on their 66th wedding anniversary.

Mr. McCoy, a graduate of the University of North Carolina-Chapel Hill, had two successful careers. In 1955 he joined Southern Bell in Charlotte; by the time he retired in 1994, he was president of BellSouth Enterprises in Atlanta — the unregulated arm of BellSouth Corporation, the first entrepreneurial endeavor after the divestiture of AT&T. Under Mr. McCoy’s leadership, BellSouth acquired cellular licenses across the globe long before the ubiquitous use of the cell phone. It was a risky and revolutionary decision that proved extremely profitable for the corporation. He also served as vice chairman of the board of BellSouth Corporation, the parent company of BellSouth Enterprises and BellSouth Telecommunications. Corporate and community-wide, Mr. McCoy was known for his fastidious attention to detail and an ethical compass that was beyond reproach.

Throughout his telecommunications career, Mr. McCoy was a devoted and generous supporter of his alma mater. It was a natural transition for him to begin a second career, putting his business skills and acumen to work for the 16-campus University of North Carolina system. As the vice chairman of finance his leadership was credited with raising the bar for management, productivity, and efficiency.

He was later named Interim Chancellor of the University of Chapel Hill, during a critical juncture for the University. But there was nothing temporary—or retiring— about the way he applied himself to the difficult tasks ahead. An outsider to academia, he regularly sought input from students, professors, and staff. With his steady hand on the helm of University-wide issues—from staffing, salaries, and strategizing to sports and a new campus plan—he earned respect in all sectors. Two signature issues launched on his watch are the Robertson Scholars Program and the Carolina Center for Public Service. Though in a lofty position, he was a visible and friendly sight around campus and was warmly greeted by the parking lot attendant as well as his granddaughter/student who would call out, “Hi, Grandpa” when she spotted him. As one boyhood friend and UNC alum said, “It’s really a fairy tale story about one of the world’s nicest guys, a guy who was dedicated to life and succeeding.”

Despite the fact that he often faced difficult and unpopular decisions, Mr. McCoy was respected for being fair, for prioritizing the University’s needs, and putting them in perspective. He was confident when taking a University budget to the North Carolina General Assembly in Raleigh and getting it passed. When necessary, he was able to cross the aisles and mend fences among the members with diplomacy and grace.

Many of those skills and values began to take root in his growing-up years on a farm. William Octavius McCoy was born on October 26, 1933, the fourth of six children of Kathleen Shirley McCoy and Marcus Cicero McCoy, a tobacco farmer in rural Arba, about an hour east of Raleigh. This was a working farm with Kathleen’s strong oversight of the garden and some of the workers—including the children who arose early to feed chickens and milk cows. Young Bill, who was never allowed in public in denim, attended a one-room schoolhouse and then graduated from the nearby Snow Hill High School. He was the senior class president and an adept athlete in baseball, basketball, and football. He was a good student and a lifelong stickler for grammar and spelling. For example, when he discovered that his middle name, Octavius, was misspelled on his birth certificate, of course he had it corrected.

Mr. McCoy put himself through college with a scholarship and by working in the library, as a residence hall manager, and running the laundry delivery service for his dorm. Though he was a walk-on member of the football team, he was already wise in setting priorities and realized he simply didn’t have the time—and he needed to work. He was a member of the Naval ROTC and graduated Phi Beta Kappa with a BS in Business Administration. In 1968 he earned a master’s degree in management as a Sloan Fellow from the Massachusetts Institute of Technology.

After graduating from Chapel Hill, he was commissioned into the U.S. Marine Corp at Quantico, Virginia and met Sara Hart, a student at nearby Mary Washington College. They married six months later and immediately moved to Pensacola, Florida for his training as a helicopter pilot. From there he was stationed at Camp Lejeune before serving on several aircraft carriers in Lebanon, Venezuela and Cuba.

Determining another priority, Mr. McCoy left the military rather than be separated from his wife and young family. Once he started with the telephone company, he rose through a variety of executive positions that took the family from Charlotte to Greensboro and Wilmington, North Carolina, to New Orleans, Nashville, Birmingham and, last stop, Atlanta.

It was soon after that retirement that he and Sara returned to Chapel Hill to begin a new chapter with the University. In 1995, Mr. McCoy was awarded the Board of Trustees’ highest honor, the William Richardson Davie Award. He was awarded the Distinguished Service Medal and was inducted into the Order of the Golden Fleece in 2000. In 2004, he received an Honorary Doctor of Laws degree from UNC-Chapel Hill. While Sara actively supported his work, she forged her own commitments to the school and was also recognized for her devotion.

Mr. McCoy was devoted to his wife and daughters. He and Sara had a second home in Highlands, North Carolina. They also enjoyed business and personal travel all over Europe, Asia and the United Kingdom. As the family grew, he took a great interest in the grandchildren’s studies and school activities, always setting a high bar for performance. He maintained friendships with a core group of colleagues from his telephone days who called each other on their birthdays.

Mr. McCoy was a valued board member, spending happy hours at his desk reading documents, digesting the inner workings of many organizations. Among those boards he served are: Progress Energy Corp. of Raleigh; Duke Reality Corp., Liberty Corp. of Greenville, South Carolina; Fidelity Investments of Boston; the North Carolina Management Trust, and First American Corp. in Nashville. He was a member of the board of the Research Triangle Foundation, the UNC Health Care System, and the developer of the Research Triangle Park in the Raleigh, Durham and Chapel Hill area. He was also a partner of Franklin Street Partners, a Chapel Hill investment management company. In Atlanta, he was active on boards of the Atlanta Symphony, High Museum of Art, and the Atlanta Chamber of Commerce.

A funeral service will be held at 1 p.m. on Saturday, January 14 at the University United Methodist Church, 150 East Franklin Street. A reception at the church will follow. Mr. McCoy will be buried at the Old Chapel Hill Cemetery. In lieu of flowers, the family would appreciate donations to the University which can be made through https://give.unc.edu/ which offers options for which area of the University to benefit. Donations to UNC may also be mailed to P.O. Box 309, Chapel Hill, NC  27514-0309.