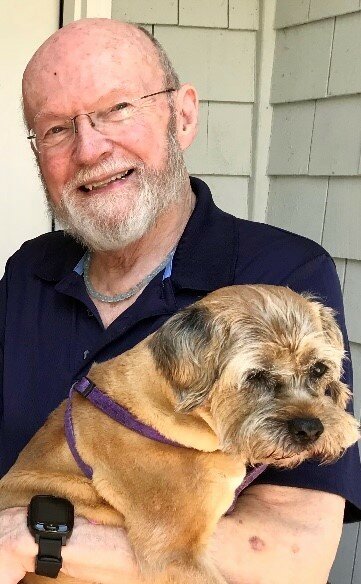 Please share a memory of Richard to include in a keepsake book for family and friends.
View Tribute Book

Richard (Dick) Albert Lucas was born to Albert and Lillian Lucas on May 27, 1939, in Sioux City, Iowa.  He spent his childhood years primarily in Sloan, Iowa, and attended high school in Yankton, SD, where he sang in the chorus, was active in his Methodist Youth Fellowship (MYF) Group, was a Boys’ State delegate, the Salutatorian on the debate team, a cheer leader, and a radio announcer for sports events.    After two years at Dakota Wesleyan University, Mitchel, SD, in 1959 he enlisted in the army in which he was a member of the U. S. Army Chorus (singing for presidents Truman and Eisenhower) the first year and then served as a Psychology Specialist in Nuremberg, Germany, for two years.  After completing his army obligation, he obtained a bachelor’s degree in English from the University of Minneapolis Twin Cities (Phi Beta Kappa) and then taught high school English in Edina, Minnesota, and Tucson, Arizona.  In 1967, he decided to again pursue his passion for psychology by obtaining a Ph.D. Degree in Clinical Psychology from the University of North Carolina Chapel Hill.   While a graduate student, he participated in several summerinternships supported by the Durham VA Hospital, and after graduating in 1972 he continued in a Clinical Psychologist staff position, particularly supporting veterans with renal failure, until he retired in 1994 and went into private practice.  For almost 30 years, via a visiting appointment, he taught undergraduate normal and abnormal psychology courses (one per semester) at the University of North Carolina.

Dick enjoyed teaching, traveling, jogging, biking, reading (particularly self-realization literature), writing (particularly poetry), and painting (particularly watercolors and acrylics). His paintings have been displayed in local venues.  He was an active member of several professional societies, including the American Psychological Association, the American Society of Clinical Hypnosis, the Jung Society of the Triangle, and the NC Psychological Association.  Dick was preceded in death by his parents and his sister (Marilyn Jean Christensen).  He is survived by his brother (Darryl Lucas, Albuquerque, New Mexico), his daughter and son-in-law (Wendy and Luke Riggsbee, Carborro, NC), his son and daughter-in-law (Sean and Kelsey Lucas, Wilmington, NC), and 5 grandchildren (Laura, Ellie, and Lucas Riggsbee and Evelyn and Brooks Lucas).

Donations in his memory to the Alzheimer’s Association or Charles House Eldercare Center, 7511 Sunrise Road, Chapel Hill, NC, 27514, will be appreciated.