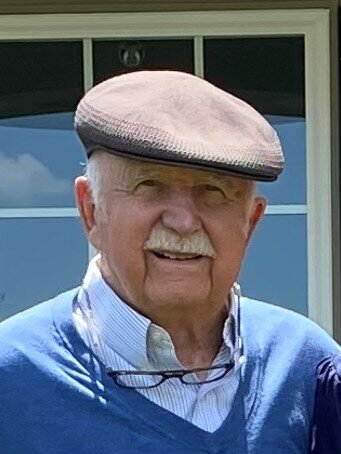 Please share a memory of Russell to include in a keepsake book for family and friends.
View Tribute Book

Russell Norman Glatz (Russ) of Chapel Hill, North Carolina died peacefully in his home on September 27, 2022, with his beloved wife Toni by his side. His colorful life and gentle charm made a substantial, lasting impact on all who knew him as a husband, father, grandfather, great grandfather, and friend. Russ started his grand adventure on April 2, 1932, in Newark, New Jersey, born to Alfred and Elsie Glatz. He developed his enterprising spirit early on, having many varied jobs in his youth starting at just 10 years old. Russ could be seen standing on the running board of moving cars delivering newspapers and at the movie theater collecting cap guns from the local children upon their entry to the Saturday matinee. Russ brought his youthful speed and agility to Bloomfield High School in New Jersey, becoming a track star that led him to a track scholarship at the University of North Carolina in Chapel Hill where he received his BA in Business. He remained a devoted and enthusiastic alum for all things UNC-related for the rest of his life. He continued to run competitively until he was eighty and officiated for UNC and the ACC for 30 years. He leveraged his track and field expertise to officiate for the Atlantic Olympics and the Special Olympics in 1996. After his undergraduate work at UNC, Russ joined the army and served for two years during the Korean war. He returned to the US after the war and continued his education at Rutgers University where he received his Master’s in Business Administration. Russ put his MBA to excellent use, working in the banking and trust business in New Jersey and New York for over 30 years and served as president of the Jaycees. He moved to Chapel Hill in 1981 where his entrepreneurial spirit continued to flourish when he opened his own business, Trust Marketing of Chapel Hill, and served as a financial advisor until his death. Russ married Teresa Currie in 1958 and remained happily married to her until her death in 1998. He married Toni Cecil Fairchild Glatz in 1999 until his death. Russ had many passions in a long and colorful life – UNC, track and field, playing golf, traveling, the Yankees, the simple pleasure of napping with his dog, but most of all, his family. His devotion to all his grandchildren was never clearer than when he took each of them overseas and to Washington DD at the age of 9 to help open the doors of adventure to them like he had done his entire life. Russ lived a long, colorful, interesting life and has left his family with full hearts and so many wonderful memories and stories. He was deeply loved and will be deeply missed. Russ is survived by his wife, Toni Glatz; son, Scot Glatz (Kerstin) of Vienna, Austria; daughter, Kathryn Arline of Lorton, Virginia; Stepson, Marc Fairchild (Amy) of Chaska, Minnesota; Stepdaughter, Kim Frederick (John) of Wentzville, Missouri; Grandaughters, Megan Arline Armes (Chris) and Liz Arline Shaeffer (Brett) of Richmond, Virginia: Grandsons, Luke Frederick and Hawk Frederick of Wentzville, Missouri; Jake Fairchild, Sean Fairchild, and James Fairchild of Chaska, Minnesota; adorable great-grandchildren Monroe Armes and Sutter Shaeffer; Brother, Al Glatz of Vero Beach, Florida; Sister, Virginia Jones of Liverpool, New York; and his beloved pal, Nellie. The family of Russell will have a celebration of life on November 12, 2022 at Finley Golf Couse Clubhouse, 500 Finley Golf Course Road, Chapel Hill, NC.  Memorial contributions may be offered to the charity of the donor's choice.

Arrangements are in the care of Walker's Funeral Home, 120 W. Franklin Street, Chapel Hill, NC  919 942 3861.  Online condolences may be shared at www.Walkersfuneralservice.com.

Share Your Memory of
Russell
Upload Your Memory View All Memories
Be the first to upload a memory!
Share A Memory