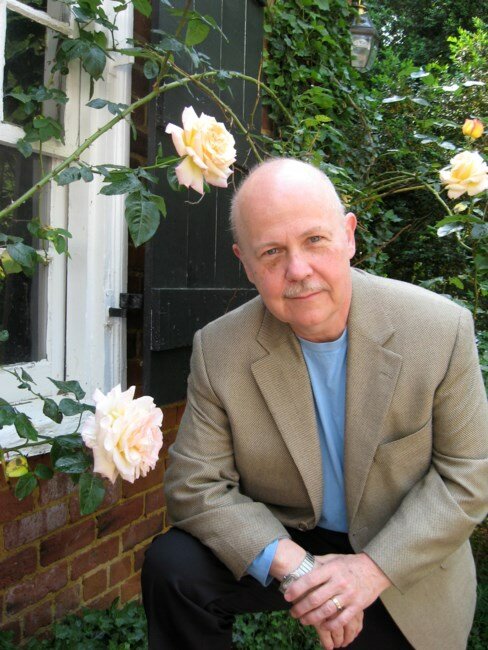 Please share a memory of Michael to include in a keepsake book for family and friends.
View Tribute Book

Michael Malone was born in Durham, North Carolina in 1942. He died on August 19, 2022 at his home in Clinton, Connecticut. He will be buried in Hillsborough, NC in the cemetery of St. Mathews Episcopal Church.  He is survived by his wife, Maureen Quilligan, his sister Sheila Waller, his brother David Malone, his five nieces and one nephew, Lisa, Kelly, Tom, Shannon, Shayna and Addie; his daughter Maggie, son-in-law Matt Shakman and his 6-year-old granddaughter Maisie, who will miss tap dancing with Pop Pop and teaching him never-ending gymnastics exercises.

Author of fourteen beloved books, graduate of UNC Chapel Hill, and ABD at Harvard, Tarheel Michael Malone wrote his first three novels set in California, Colorado, and Connecticut.  When he once confessed this to Eudora Welty, after she had advised young authors to ”Write about the land beneath your feet,” she told him, “Honey, you are just sneaking up on Carolina.” When Malcolm Cowley  read the book in manuscript, he immediately recognized that the Connecticut town Malone wrote about in Dingley Falls was not at all a New England village, but a distinctly southern hamlet,”  “First Selectmen,  not Mayors, run New England towns” he instructed.

Malone wrote his next four books, Handling Sin, Uncivil Seasons, Times Witness, and Foolscap,  all set in the south, before he finally did go home again to Hillsborough, North Carolina in 2000 where he wrote his final books,  First Lady, Four Corners of the Sky, and The Last Noel.  In the middle of his achievements in fiction, he fulfilled one of his oldest dreams of “writing for Broadway” by accepting a job at 66th and Broadway (home of ABC  Television) as Head Writer for the daytime drama, “One Life to Live,” for which he won an Emmy and a Writer’s Guild award.  He also co-wrote another book, The Killing Club, supposedly by a character on the show, in a subtle post-modern critique of those who thought he was slumming by writing for daytime TV.  After an editor at Knopf castigated  him for writing Uncivil Seasons, a mere mystery novel, he won an Edgar in the genre, awarded by the American Mystery Writers Association.  He was working on a fourth book in his “Cuddy and Justin” series when he fell ill with cancer.

He was a gifted teacher—the “wittiest professor I’ve ever had” a Harvard student quipped.  For a number of years he led a class of 300 students at Duke  University in a course he called “America Dreams American Movies” (ADAM)  in which they studied the many genres of popular film.  In the last quarter of the  class the students divided up into ten teams of thirty in which they wrote and produced their own  original 20 minute movies.  The “final” for the course was a gala modeled on the Oscars,  in which “Golden Apples”  were awarded  for Best Picture, Best Screenplay, Best Actor, etc.  Coach K always presented the “Apple” for Best  Director, regularly reminding everyone that a director’s achievement was created by the team.  Malone  was also a mesmerizing public speaker.  Dan Rather once confessed to an audience after Malone had regaled them for his twenty minute segment on ta panel, “I wasn’t scared in Vietnam, but having to go after that guy, I am now!”

As significant as his literary contributions, Malone was also an exceptionally talented creator of communities. With other game and upbeat souls, he founded amateur theatrical societies wherever he lived: CATS in Clinton, CT, PHATS in Philadelphia, PA and HATS in Hillsborough, NC.  For 13 years in a row, with noted Hillsborough author Allan Gurganus,  Malone performed their two-man adaptation of A Christmas Carol at St. Matthew’s Episcopal Church in Hillsborough, NC. They sold out every show.

Malone loved cooking, musicals, jazz, dancing and justice for all unfairly incarcerated. In his creative works, he spoke out against the death penalty, raised awareness about the AIDS crisis and Lupus, and was an early advocate for LGBTQ rights. His novels set in the South continuously reminded readers of the dangers of white supremacy. A donor to the Southern Poverty Law Center for over 40 years, Michael’s family asks that any donations in his name be made to this  increasingly crucial institution.

At the end of First Lady, Malone wrote about the difference between rock stars and saints: stars “draw all the light to them, but throw it off too, like real stars. . . It’s different with saints. If stars are the light then saints are the people the light shines through, and illuminates what they love so that we all can see its beauty.” Although many people thought he was a saint when he helped them to see their own dreams, Malone didn’t think so. Instead he hoped to become an angel,  as in the plot of some of his favorite movies. He is doubtless an angel now, and like his namesake, one with a truly magnificent wingspan.

There will be a public viewing on Sunday, August 28, 2022 4-6 pm. at Walkers Funeral Home on Churton St., Hillsborough, NC.  A funeral service will be held on August 29 at 11:00 am at St. Matthews Episcopal Church, St. Mary’s Rd., Hillsborough, NC. Burial will follow service in Church Cemetery.

Share Your Memory of
Michael
Upload Your Memory View All Memories
Be the first to upload a memory!
Share A Memory