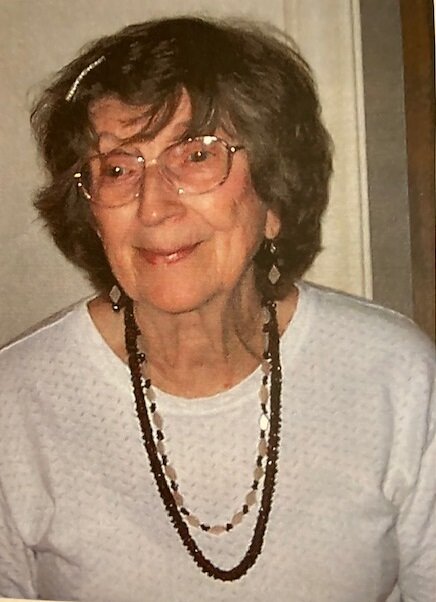 Please share a memory of Mary to include in a keepsake book for family and friends.
View Tribute Book

Mary Roberta Kruse Porter 93, of Durham, NC., passed away after a long illness on Wednesday, June 28, 2022 at the UNC Hospice in Pittsboro, NC. She was born on January 17, 1929 in New Port News, VA., the daughter of the late Mary Wrenn Obst and Rudolph William Franklin Obst. Due to her father’s death and her mother’s poor health, her birthparents had to give her up for adoption. After several experiences with the foster parent program, she was finally adopted. Her adoptive parents are the late Johanna Kahler Kruse and Carl Henry Kruse. After completing her education, she moved to Durham, NC where she lived a full and happy life.

Mary’s memorial service will be held at Walkers Funeral Home of Chapel Hill, NC on Sunday, July 3rd at 3:00 with the Reverend Kori Robins of Orange United Methodist Church officiating. Mary chose to be cremated and have her ashes scattered at the UNC Memorial Grove (date TBD). Walker’s Funeral Home will be handling the funeral arrangements.

Mary attended William Penn High School in New Castle, Delaware and graduated in 1947. She went on to earn a degree in Science and Nursing from The Delaware Hospital School of Nursing. She worked as a Private Duty Registered Nurse for several hospitals and private individuals through a nurse’s registry in the Durham, NC area for 33 years.

Mary was nicknamed Krusie by her classmates. Krusie’s interests varied. She was a member of the Arts and Craft Club; the Senior Play Cast; Christmas Dance Committee; Penn Quill Staff 4; the Hop Committee and the Glee Club. In addition, she was a teacher’s helper for Miss Proud. According to her friends, she had a happy disposition; she was a Chemistry Student with an impressive number of A’s; she was understanding; companionable; she was a great pal and slightly impish with an obvious southern drawl. Later in her retirement, she served as a volunteer with the Orange County Government Department on Aging.

In lieu of flowers, Memorial donations may be made to Orange County Department on Aging, Seymour Center, 2551 Homestead Road, Chapel Hill, NC 27516. The family wishes to extend their gratitude to Walker Funeral Home for there guidance through this process.

Share Your Memory of
Mary
Upload Your Memory View All Memories
Be the first to upload a memory!
Share A Memory