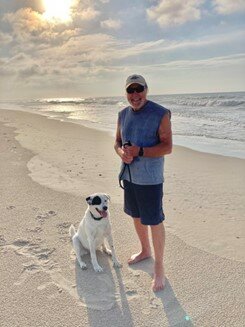 In the early morning hours of May 24, 2022, James Brien Dailey left this plane of existence. He was in the home he had built for his family, with his wife and greatest love, Janiene, his son Tom, and an entourage of rescued animals. Jim Dailey was born in Erie, PA in 1948 to Annabel and James. He spoke often of his parents and their experience as Polish Catholic immigrants, and his respect of those traditions and values shaped his life. Jim was a hard worker, talented athlete, gifted coach, and above all, a good man. The idea of family was strong in him, but for Jim and Janiene, family was not rigid, but fluid and malleable, and always capable of expansion. Jim always held space in his home for any creature, human or animal, who wanted love…except squirrels. He used his strength and talents not to advance himself, but to protect and provide for those he took into his heart. In return, he asked those in his life to push, to grow, and to achieve. This was a man who found his greatest joy in raising others up. Jim “found” his happiest moments on the basketball court, on the deck of a boat, at concerts, rodeos, and in travel. Most of all though, he found his happiest times in a quite moment with those he loved. He is survived by his wife, Janiene, his three sons, Adam, Tom, and Jake, three grandchildren, Alston, Liza, and Noah, and three daughters in law (each of whom was his favorite).

Please Join the family for a reception following the service at the family home, 2824 Gait Way, Chapel Hill, NC 27516