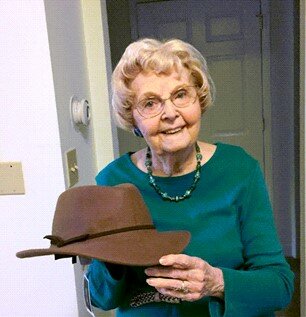 Barbara, known to family and friends as Barby and her grandchildren as Grammy, was born in Amsterdam, NY, as the middle child of Jesse and Orville Mason. Her childhood was filled with good times and loving relatives. Summers were spent on a farm near Northville and at the family boat livery in Speculator, in the beautiful New York Adirondack region.

After graduating high school in 1945, Barbara studied art at Syracuse University before returning to Amsterdam for an office job with Mohawk Mills Carpet Company, where she was a member of the Mohawk Mills Choir. In Amsterdam, she met the love of her life, Thomas J. Perkins, and they married in 1954. Over their 33-year marriage, during which they lived in Amsterdam, the Albany area, Oswego and Radisson, NY, Barbara and Tom raised four children while Tom continued his career with Niagara Mohawk Power Company. Barbara was an active member of the Oswego Art Guild and entered her beautiful watercolor florals, landscape prints and other works in many Art Guild shows. She also enjoyed interior design and taught an introductory interior design course for the County Cooperative Extension. Later, as a resident of Radisson, she was an editor for the Radisson Reflections community newsletter. She and Tom enjoyed traveling for his work, playing golf and visiting with family and friends.

After losing her beloved husband in 1988, Barbara split her time between Baldwinsville, NY and Bradenton, FL, where she was active in golf leagues and art circles, eventually moving full-time to Florida. In 2010 she relocated to Chapel Hill, making new friends and enjoying family holidays, shopping trips, and other activities.

She was known for her sense of style and positive attitude. She was the best gift recipient, especially when the gift involved clothes, jewelry, or chocolate, and prided herself on her photographic memory.

Leavell and Sean Leavell; great grandchildren Elliot and Madelyn Drengson as well as her cherished nieces, nephews, great-nieces and great-nephews.

Family and friends will be received on Wednesday, May 25 from 9:00 to 11:00 am at Maurer Funeral Home - Moyers Corners, 3541 State Route 31, Baldwinsville, NY. Funeral services will be conducted at 11:00 am May 25 at the funeral home. The burial will follow at Riverview Cemetery Association, 70 Tappan St., Baldwinsville, NY.

In lieu of flowers, the family requests memorial contributions to the Carolina Meadows Foundation - Employee Fund or a charity of one’s choice.

Memories and expressions of sympathy for Barbara Perkins may be shared on her Obituary Tribute and Guestbook at walkersfuneralservice.com and at www.maurerfuneralhome.com.