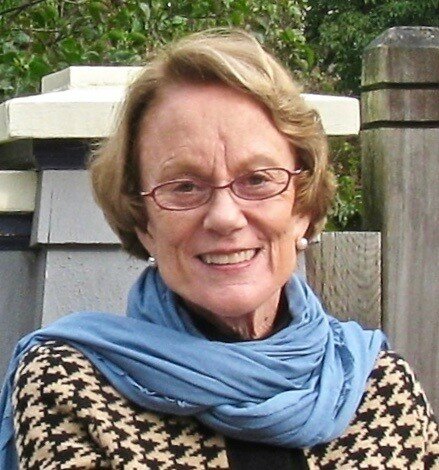 Please share a memory of Moyna to include in a keepsake book for family and friends.
View Tribute Book

Treasured by friends, esteemed by colleagues, and cherished by family, Moyna Blair Monroe passed peacefully at home surrounded by her children. She will be remembered as a vibrant person who, in sharing her strength and persistence, made the world a better place.

Born in New Orleans, Moyna embodied grace, grit, and good nature. It’s no surprise she was named the Queen of the Mystick Krewe of Comus at Mardis Gras in 1956. She approached life with curiosity and conviction. After graduating from Wellesley in 1957, she became an aide to U.S. Representative Hale Boggs of Louisiana, learning the ins and outs of politics and procedure from one of the best. After she married she lived in various cities in the United States as well as Lima, Peru. She then settled in Chapel Hill, North Carolina, to raise her family.

Her deep reverence for the great outdoors made a profound impact and lasting impression on her children. In addition to adventures in and around Chapel Hill, there were Sierra Club trips and time at the family home in Highlands, North Carolina. An early advocate for preserving the unique habitats of the Southern Appalachian Mountains, Moyna served on the board of trustees at the Highlands Biological Station, a multi-campus research facility, museum, and botanical garden affiliated with Western Carolina University.

She was also the Executive Director and a board member of the Highlands Land Trust, Inc. During her tenure, she revitalized their work and saved a good bit of land, including Little and Big Fodderstack Mountains. Moyna worked with landowners, the Town of Highlands, the U.S. Forest Service, and the Nature Conservancy to save these significant landmarks and rare ecosystems. The preserved habitats include mountain heath balds, stands of old-growth Canadian hemlock and dwarf pitch pines, some of which are more than 400 years old. Today, the U.S. Forest Service owns and manages the property as North Carolina Nature Heritage Land.

A persuader, a promoter, and a connector, Moyna energetically gave her time, talent, and effort to other good causes. As one friend recalled, “Moyna believed so much in the right of what she was doing that she would inspire people to get involved and fight the good fight despite the odds.”

Moyna was on the board of the Community Foundation of Western North Carolina, and a vital advocate for The Bascom: A Center for the Visual Arts. Moyna was instrumental in The Bascom’s move to a new facility, negotiating between the parties and raising funds for land acquisition. According to someone close to the project, Moyna’s finesse and strategy “single-handedly saved the day”. Thanks in part to her endeavors, the organization has become a vital driver of the regional creative economy.

A woman of strong and abiding faith, Moyna possessed "the unfading beauty of a gentle and quiet spirit, which is of great worth in God’s sight" (1 Peter 3:4). She was an active and devoted member of The Church of the Holy Family in Chapel Hill and the Church of Incarnation in Highlands.

Moyna is survived by her children, Malcolm (Tamara), Blair (Ariel), Logan (Jane), and Kathryn (Michael); her grandchildren, to whom she was lovingly known as "Go Go", Callum, Duncan, Griffin, Harper, and Monique; and her siblings Diana Lewis (Tom) and Arthur Monroe (Marcia). Her parents, Malcolm and Mary Monroe, preceded her in death. The family extends its deepest gratitude to the staff of the Pines Health Center at Carolina Meadows who cared for Moyna so well.

A private service will be held in Highlands, North Carolina. Gifts in Moyna’s memory can be made to the Highlands-Cashiers Land Trust (hicashlt.org), the Southern Appalachian Highlands Conservancy (appalachian.org), or your favorite local land conservancy.