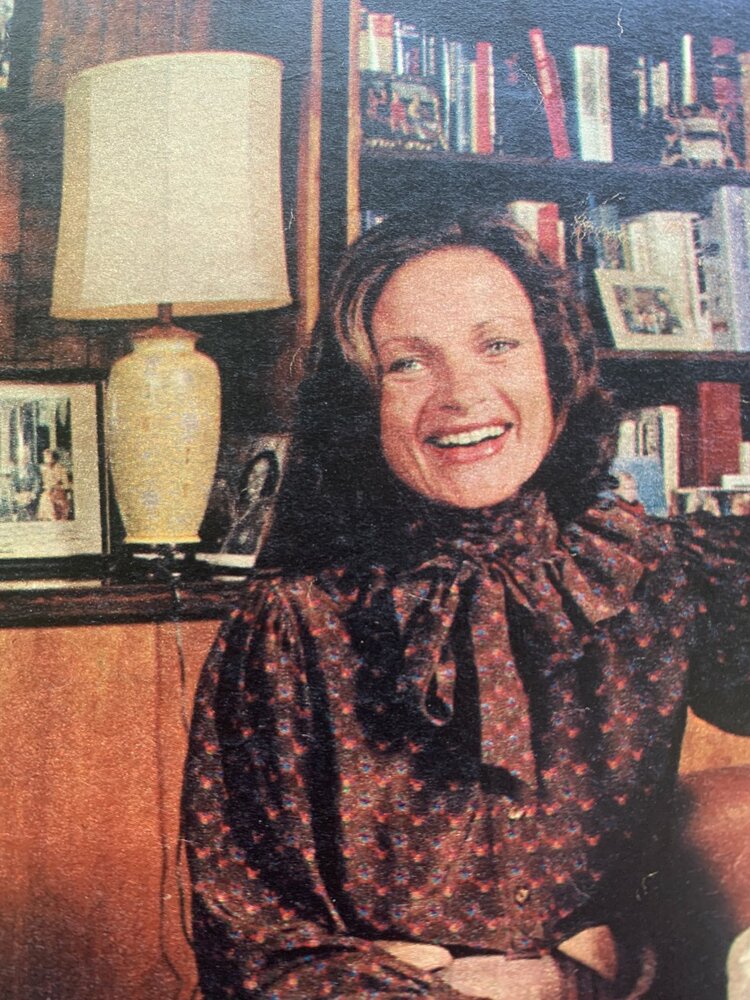 On October 10, 1944, Sharon was born to Richard C. Hines and Muriel Hammer Hines in Muscatine, IA. After graduating from St. Catherine's High School in 1962, she went on to study English at the University of Iowa and George Washington University, graduating with a B.A. and M.A. in English.

After college, Sharon moved to Chicago, home of the Blues music she loved throughout her life. She worked as an English Teacher and Administrative Assistant. While at work one day in Chicago, Sharon met Martin Agronsky, a journalist in town giving a speech. He saw Sharon standing at her office window, and it was love at first sight.

Sharon and Martin were married in 1971, having one daughter, Rachel (Alexander) Kovalev. They lived in Washington, D.C., where Martin was the White House Reporter for C.B.S. News. After CBS, Martin became the moderator of the political talk show, Agronsky & Company until he retired.

Sharon and Martin's charity events and fundraisers for their favorite causes were staples of the Washington social calendar. A renowned Washington hostess, Sharon was known for her sharp wit, intelligence, beauty, and sense of humor. Sharon's lifelong passion for gardening began when she volunteered as a docent at the Hillwood Museum in Washington, D.C. She learned the art of landscape design from the Hillwood landscapers, eventually becoming a Master Gardener.

Sharon continued her education and received her Juris Doctor (J.D.) from U.D.C. while Rachel was in high school. Sharon's lifelong love of learning applied to her study of the law. She used her law degree as a volunteer Mediator in the D.C. courts and provided pro bono legal advice through the United Way.

In 1994, Sharon moved to Asheville, N.C., where she lived until 2019. Sharon loved Asheville and enjoyed spending time with her extended family, who lived in the area. Sharon traced her genealogy back to the 1600s, when her Scotch-Irish ancestors moved to the Carolinas to seek a better life. Bishop Cottage in the historic neighborhood of Montford, Sharon's Asheville home, was a mainstay of Asheville home and garden tours. Sharon worked as an Estate Attorney in Asheville before retiring and returning to her pro bono legal work.

Sharon’s volunteer work in Asheville included working as a Community Liaison to the Asheville Police Department, where she connected Asheville residents with services. Her tireless volunteering also led to her working with local landscapers to beautify downtown Asheville. Sharon's zest for life, love of beauty, and desire to help people who had "hit a rough spot" made her a beloved and treasured resident of Asheville. Walking in Asheville with "Miss Sharon" was like being with a celebrity. Everyone stopped her and wanted to chat. Sharon rescued Pitbulls and hound dogs and could always be found with at least one dog, walking through downtown Asheville in the early morning hours.

In 2019, she moved to Chapel Hill to be close to her daughter and granddaughters, Charlotte and Anna Kovalev, in her final years. We will miss her greatly.

Sharon was predeceased by Martin Agronsky, Richard and Muriel Hines, and her cousins, Kay Hines and Ellen Hines. She is survived by John and Bridget Hines and Rachel, Alexander, Charlotte, and Anna Kovalev.

The family requests that in lieu of flowers, a donation be made to the Alzheimer's Association.

Share Your Memory of
Sharon
Upload Your Memory View All Memories
Be the first to upload a memory!
Share A Memory