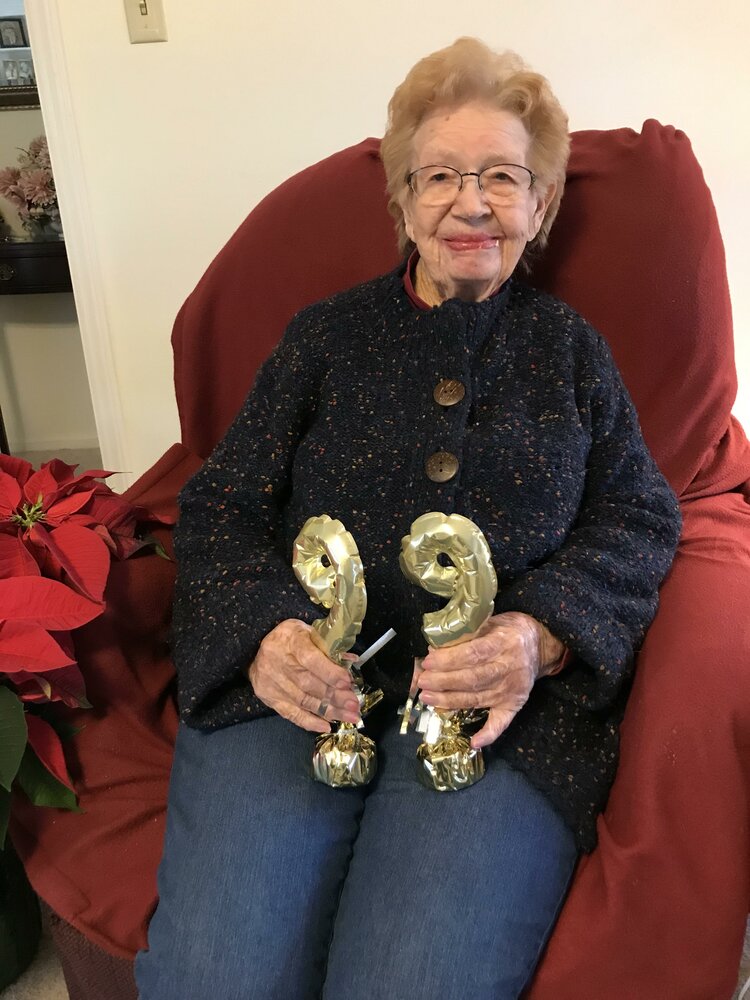 After 99 years full of life and love, Beulah Estelle Miller Irwin passed away at Duke Hospital in Durham, NC, on Sunday, March 13, 2022. She died of complications following surgery a week earlier.

Beulah was born on December 10, 1922, in Holmes County, FL, the first child of Vernon and Loni Myers Miller. After her father died in a car accident in 1927, and her mother died of pneumonia in 1932, Beulah and her sister and brother grew up with their maternal grandmother, California (Callie) Myers in Bonifay, FL.

Following graduation from high school, Beulah struck out for the big city, moving to Charleston, SC, to attend nursing school. Memories from her time in nursing school included providing care for German prisoners of war who were captured during World War II. She also enjoyed telling about how a hospital ceiling fell on her head while she was caring for a baby. She was knocked out but considered that just part of doing what was required to protect those under her care. Before finishing her nursing training, however, she married Southern gentleman George Edward Irwin, who she met on a blind date.

Beulah worked at the Charleston County Courthouse RMC office and later for the Charleston County Clerk of Court. After retirement, she and George enjoyed traveling throughout Europe and North America. Their travels were enhanced by visits to their children and their families, all serving in the U.S. Air Force. Those destinations included Alaska, Turkey, Germany, Italy, and Ecuador. They especially enjoyed going to Hawaii, visiting there five times with a Charleston travel agent and his tour groups.

In Charleston, Beulah and George attended Blessed Sacrament Catholic Church in West Ashley. George died in 2010 after 68 years of marriage, and in 2013 Beulah moved from Charleston to Hillsborough, NC, to be closer to family.

She is also survived by sisters-in-law Delores Irwin Wrenn and Charlotte Irwin Hanna, both of Charleston, and Shirley Irwin Hanlon of Monroeville, PA. Beulah liked bragging about the fact that she had 22 great grandchildren, and two great great grandchildren.

Beulah was deeply loved and will be deeply missed by those who survive her, including a number of nieces and nephews, cousins, and many special friends she made after moving from Charleston to Hillsborough.

In lieu of flowers, the family suggests contributions be made to your local SPCA in celebration of Beulah’s labradoodle Sadie, with whom she shared love and devotion (and table scraps) for the past nine years.

Share Your Memory of
Beulah
Upload Your Memory View All Memories
Be the first to upload a memory!
Share A Memory