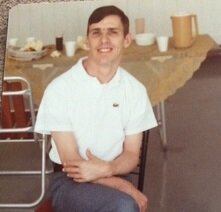 John, "Johnny" Lingerfelt, Jr., age 75, passed away peacefully after months of being in the wonderful care of Liberty Hospice of Durham while he was living at Parkview Nursing and Rehab., Legion Road, Chapel Hill, NC.  His sister, Judy, was his caregiver and his Healthcare power of Attorney for over 30 years.
Johnny was born May 1, 1946 in Cleveland County to his loving parents, Judith Wray Lingerfelt and John Wm Lingerfelt, Sr. "Pee Wee" was a nickname given to Johnny by Pa Lingerfelt and his mom.  Johnny attended Piedmont School in Lawndale, NC; then, he transferred to Elizabeth School in Shelby, NC., where he could obtain more appropriate education for his Cerebral Palsy diagnosis.  There, Johnny learned to use an electric typewriter and write cursive; therefore,  the family enjoyed cards and recipes he wrote for them.   Johnny had a period of residence at Lenox Baker School, Durham,  where he learned basic skills as dressing himself, buttoning and other essential and life skills. Later as an adolescent and as a young adulthood, Johnny worked in Charlotte's  Niven's Sheltered Workshop. Johnny also was a "star" and participant at a United Cerebral Palsy Telethon in Shelby, NC.
John was a member of New Bethel Baptist Church in Lawndale, NC and Hoskins Avenue Baptist in Charlotte, NC.
Johnny loved southern history, biographies,  and movies such as Gone With the Wind, Dr Zhivago, and Sound of Music. His cognitive memory, spelling, and auditory skills were outstanding.  Johnny loved and attended many Billy Graham's Revivals in Charlotte, NC.  Listening to the sermons and Country Music, especially George Strait, brought him joy and we thank the Hospice Chaplain, Sonja, for playing his songs during their visits. Johnny's other loves were his food and drink that consisted of coke, coffee, banana pudding, chocolate, ribeye steaks, perch fish, and Red Bridges BBQ.  His family, cousins, and parents made sure he was included in all outings, in many trips, and in playing many games of Rook.
Johnny was preceded in death by his paternal and maternal grandparents and his wonderful and loving mother and father. Johnny was survived by Judy Lingerfelt Oakes, sister, and her husband, Robert Jr., a nephew, Robby Oakes, and a niece, Angela Oakes.  Together, Robby and Angela had five beautiful daughters who were so important to Johnny.  He was fortunate to have many loving surviving cousins and one surviving aunt, Joann Wray Machleit, from Virginia. Johnny inherited a great sense of humor which kept him positive and strong.  He loved his family deeply and he also knew he was deeply loved. Johnny was an inspiration to everyone who knew him.  He was Lingerfelt Strong!
Walker's Funeral Home in Chapel Hill is helping with the cremation of John. In honor of Johnny's wish,  he will be placed with his mother and father in the Rose Hill Cemetary in Fallston, NC.  Memorials may be made to Liberty Hospice, 3414 N. Duke Street, Suite 201, Durham, NC 27704.