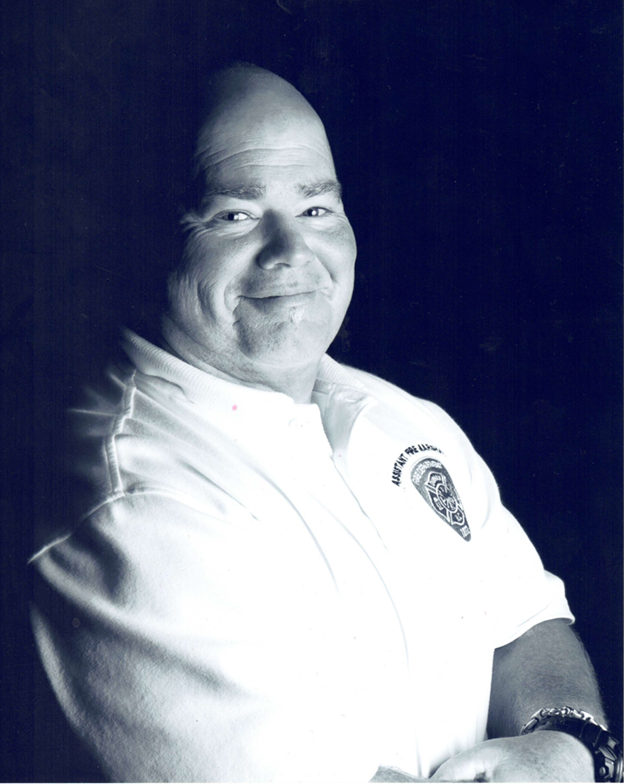 With deepest regret and sorrow, we report the line-of-duty death of David “Scotty” Merritt, 54 years old, who passed away on December 26, 2021, after a short battle with intestinal cancer. Scotty was born in Chapel Hill, North Carolina on August 2, 1967, and resided in Mebane, North Carolina.

Scotty was preceded in death by his grandparents, John Henry and Tessie Mae Kirby.

Scotty lived with his mother, Brenda Kirby Whitaker and his grandparents, John Henry and Tessie Mae for the first three years of his life and they were inseparable. Wherever John Henry went, Scotty followed. Some of Scotty’s favorite memories were playing in the orchard between their home and the country store that his grandfather owned in the White Cross Community. Scotty always remembered the lessons that his grandparents taught him; most importantly, how to treat others with respect. Scotty enjoyed learning from the older generation that would congregate at the country store.

At 15 years old, Scotty made the wrestling team at Orange High School. He also discovered what real work was, when at the age of 16, he was employed as a dishwasher at UNC Hospital. During high school, Scotty was known as the class clown.

Scotty graduated from Orange High School in 1985 and he did not know what he wanted to do with the rest of his life.

In 1989, Scotty graduated from Alamance Community College with his Associate’s Degree in Criminal Justice which he earned while working two jobs to support his education. After graduating, Scotty had the opportunity to work with the Wake County Sheriff's Office where he was employed for 2.5 years. Scotty discovered that criminal justice was not for him, so he moved back to the White Cross Community. Scotty’s best friend, Kenny Stewart, introduced him to the fire service. Kenny and Scotty convinced other friends to join the White Cross Fire Department with them, including Jeff and Sherry Mooney.

In May 1996, Scotty started with the Carrboro Fire Department, his first paid fire fighting job. From 1996 until 2001 Scotty worked in the fire suppression division. In 2001, he was promoted to Lieutenant. In February 2006 Scotty took a position as the Assistant Fire Marshal of Orange County, North Carolina.  In 2009, Scotty had the opportunity to serve as the Fire Marshal for Columbus County, North Carolina. While in Columbus County, Scotty tried boiled peanuts, collard greens and hog liver for the first time and discovered that they are an “acquired taste.” In 2014, Scotty returned to the Triangle, to be closer to his family, and help his children begin their transition to adulthood.  Scotty has been employed as an Assistant Fire Marshal with the City of Durham Fire Department since 2014 and officially retired, posthumously, from the Fire Service on January 1, 2022. While employed with the City of Durham, Scotty performed routine and construction inspections and investigated numerous fires. Some of his biggest projects were the 18-story building in downtown Durham, as well as the Amazon and FedEx distribution centers.

Since returning to the Triangle area, Scotty has had the opportunity to witness his son, Austin, also join the fire service and become a member of the White Cross Fire Department. Scotty was also present to watch his daughter, Anna, become a young lady full of grace, kindness and love. He also married a wonderful woman and became the Step-Father for a rambunctious young man.

Some of Scotty’s favorite things were watching Clemson and East Carolina University play college football; family gatherings; pizza with pepperoni and mushrooms; sitting on the beach with a cold beer and teaching the younger generation of firefighters.

Scotty was the life of every party with a beautiful smile that reached his blue eyes. He was a wonderful son, devoted father and compassionate husband. He was welcoming and entertaining, kind, generous and helpful. Scotty always let others know what he was thinking - through his words or simply “the look.” Scotty’s advice to those he leaves behind:

The family would like to thank everyone that has shown their support during the last few months. Scotty was blessed to be loved by so many people and he felt that love before he passed away.

The Celebration of Scotty’s life will be held at Antioch Baptist Church (1707 White Cross Road, Chapel Hill, North Carolina 27516) on January 3rd at 11am