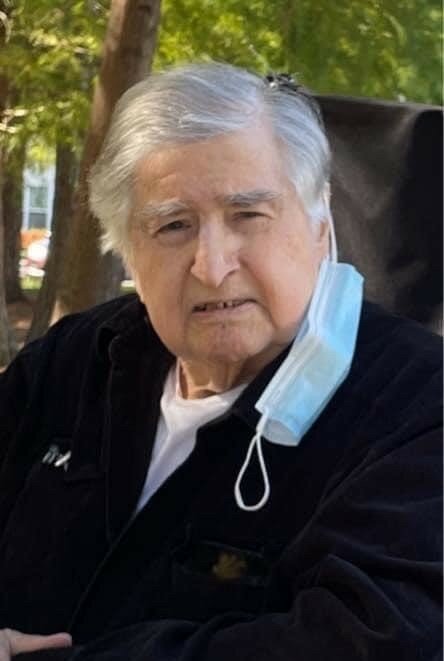 Mr. Hugh Charles (Mike) Friel passed away peacefully on November 30, 2021 with family at his side, at his home (The Arbor, Galloway Ridge, Pittsboro, NC). He celebrated his 95th birthday on November 21 and passed 9 days latter due to complications of cancer, recent hip replacement surgery, COVID-19 and advanced age.  He was preceded in death by his wife of 47 years Elizabeth Jane (Betty) Backus Friel (2002); his brothers Joseph Friel (Va. Beach, VA) and Leo Friel (New York, NY); his parents, Deborah and Joseph Friel (Long Island, NY); and his grandfather and grandmother, Hugh and GiGi Fish, known as Pop and GiGi. Also preceding him in death were his brother’s wives, Eleanor (Joseph) and Dorothy (Leo); Betty’s sisters and their husbands, Nicky and Harry Johnson and Ann and Dick Parariello; nieces and nephews Deborah Friel Hodges and Randy Friel, Laurie, Frank and Randy Johnson; and great-grand-nephew Tucker.

As the only remaining member of his generation, Mike served as patriarch of a very large extended family and is also mourned by his brothers’ children Skip (Sherry), Thomas (Tracy), Eileen, and Robert Friel and Sam Hodges, and their children; and by Betty’s sisters’ children Dianne (Bruce), Kathi, Rod (Louann), Fran and Mark (Carole) Johnson; Debbie (Bob Anastasi), Jay, Lynne (Mark Tagatz), Jodi (Joe Needham) and Dianne (Tim Dame) Panariello and their children.

Mike grew up on Long Island, NY surrounded by his parents’ siblings and their families. He joined the Navy at the age of 17, and was a Signalman on the Liberty Ship SS Henry S Lane in the North Atlantic during WWII. When he returned to the US and was honorably discharged from the Navy in 1946, he joined the Washington DC Fire Department (DCFD) and met his future wife Elizabeth (Betty) who was a registered nurse at a nearby hospital. With one working nights and one on day-shift they began having breakfast together before he drove her to work.  Mike and Betty were married several months later and raised their daughters, Susan and Nancy, in Springfield, Virginia where both were very active in their community and in their children’s lives. After serious injury ended Mike’s 30-year career as a Lieutenant in the DCFD, Mike took a civilian position as a Fire Investigator with the US Coast Guard, traveling the country to determine the causes of shipboard fires.  His favorite work trip was when Betty accompanied him and they toured parts of Alaska together. Both avid tennis players, Mike and Betty first retired to Venice, Florida where they enjoyed frequent visits from their five grandchildren, watching them play in their pool and at the beach, and teaching them to play tennis.  They relocated to Chapel Hill, NC in 2002, immersing themselves in the lives of their grandchildren.

After Betty’s passing in September 2002, Mike spent time exploring the small towns and back roads they had enjoyed together and learning to live without her. He then settled in New Bern, NC where he explored the rivers and streams around New Bern in his Boston Whaler. Mike returned to the Chapel Hill area in 2006, settling into the retirement community at Galloway Ridge in Pittsboro.  Mike lived independently until his cancer diagnosis in March of 2021 and then moved to The Arbor assisted living at Galloway Ridge where he passed November 30.

Mike has been adamant about protecting his friends and family during the Covid-19 pandemic, so the family will not have a memorial service at this time and requests that in lieu of flowers, those who wish to make donations in his memory might consider American Cancer Society, the Multiple Myeloma Research Foundation, the Juvenile Diabetes Research Foundation, or another charity of their choice.

Share Your Memory of
Hugh
Upload Your Memory View All Memories
Be the first to upload a memory!
Share A Memory