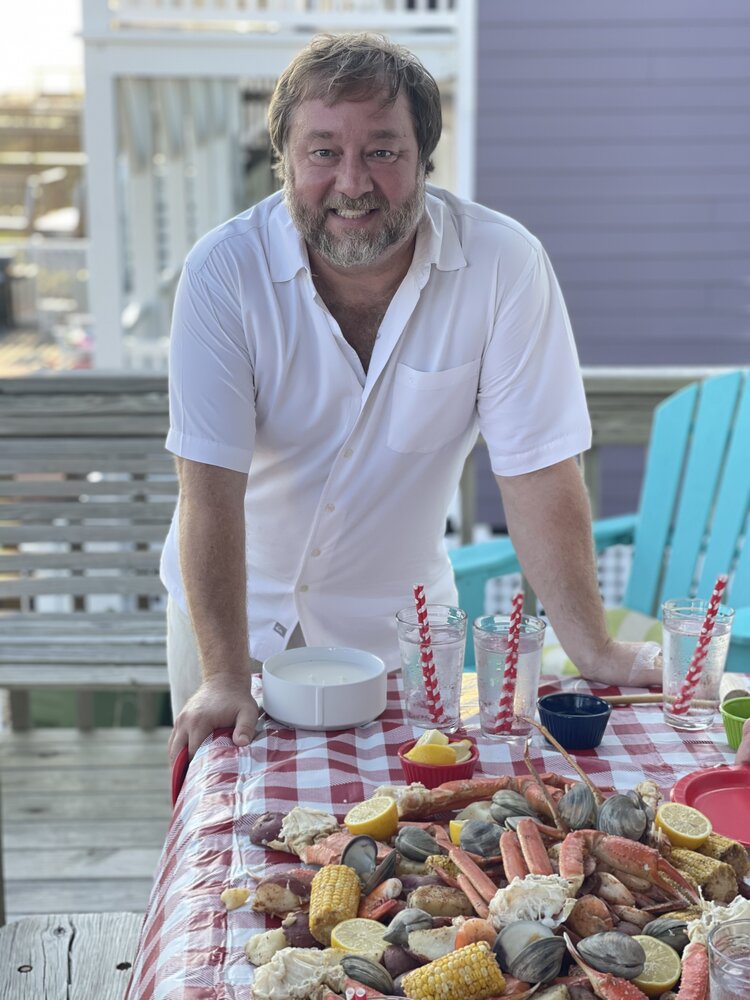 On October 8, 2021, Jarred Beau Bennett of Hillsborough, NC died at Duke University Hospital from an intracranial brain hemorrhage. Compounding this profound and unexpected loss, October 8 was also his 10th wedding anniversary with his wife, Lauren. Through their grief, Beau's mother, brother, and wife all sat with him at the hospital, held him close, and grappled with the loss of someone so young. At only 45 years of age, Beau owned a thriving business and still had a world of possibilities left to realize in a life cut too short.

Beau, born on November 27, 1975 in Washington, NC to parents Robert "Bob" Marvin Bennett and Geraldine Boyd Bennett McKinley in Washington, NC, was intensely proud of his Down East roots. He played baseball, football, music, and would do anything if it was at the beach. After graduating from Washington High School in 1994, he moved to Chapel Hill in 1996, beginning his culinary career. Beau cherished working at restaurants such as Crooks Corner, 411 West, and Pyewacket. The wide range of experiences imparted by these restaurants, and the people within each establishment, taught him the needed skills to start his own catering company in 2008, Beau Catering.

One of Beau’s favorite pastimes was attending music shows - always in the front and always yelling. You could hear him talking and laughing, driving past and shouting your name, and stopping in for a hello. As he watched the Dallas Cowboys or the North Carolina Tarheels, he would bring you into the game through his sheer enthusiasm. It was hard to keep Beau in one place - he was always on the move. However, even such a kinetic and enthusiastic person like Beau had places that allowed for respite and quiet - Bennett Acres, The Point, and always the beach. Beau truly loved any water, including a pool.

Beau is survived by his wife, Lauren Erickson Bennett. They were together for 22 years, married for ten, and best friends for life. His brother and sister-in-law, B. Rain Bennett and Maya Bennett, and his beloved niece and nephew, Bellamy Bennett and Bishop Bennett, also survive him. He cherished Rain and wanted nothing more in life than to be the best uncle to the kids as he could. His mother and stepfather, Geraldine Bennett McKinley and Nicholas McKinley of Washington, NC, also survive him and will miss his exuberance for life and daily calls to simply talk about the day. He is survived as well by his sister-in-law Marissa Erickson who helped build the catering company and Beau's brand over many years as his Catering Manager. Beau is survived by his older half-brother, Robert Shawn Bennett and predeceased by his father, Bob Bennett, who passed away in 2007.

There will be a memorial open to all at The Carolina Club, 3-6 pm on November 10, 2021, with an organized program from 4-5 pm and a reception to follow. A private reception will follow at 411 West for invited guests. There is also a memorial for those in Washington, NC on Wednesday October 27, 2021 at First Baptist Church from 1 -3 pm. Walker’s Funeral Home on Beau's beloved Franklin Street is assisting the family. In honor of Beau's love for music, fun, anything extracurricular, and his community, donations are being accepted in his memory at skjajafund.org in lieu of flowers. To have known Beau was to love Beau. His spirit inspired others to build a community, as he built for himself, full of friends and loved ones who felt like family. We love you, Beau-Beau.

Share Your Memory of
Jarred
Upload Your Memory View All Memories
Be the first to upload a memory!
Share A Memory