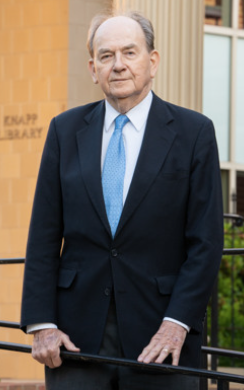 John Sanders was a public servant in the finest sense of the word. After graduating from law school at UNC in 1954, he joined the Institute of Government (now the School of Government), becoming its second director in 1956, a post he held for 33 years.

He helped draft legislation forming the NC community college system and the 16-campus consolidated University of North Carolina system. He was a member of the committee that drafted the North Carolina Constitution of 1971. He worked with historic preservation across the state, most notably on Raleigh's NC State Capitol building. He took a five-year break from the Institute of Government to serve as the Vice President of the UNC system serving as vice president of planning for the UNC system, guiding the university through desegregation.

In 2003 UNC honored him by adding his name to the School of Government building, and in 2019, he received an honorary doctorate from UNC-Chapel Hill.

John Sanders was a dedicated statesman helping shape the State of North Carolina, the goodliest land. His legacy spans the mountains, piedmont, and coastal plain. He loved the land we live in and sought  to make it  "as happy a region as on this side of heaven".

In lieu of flowers, a donation can be made to The North Carolina State Capitol Foundation.

Service details will be announced at a later date.