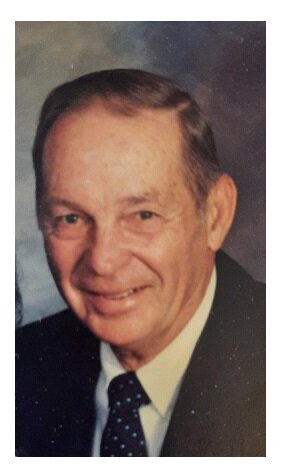 Frank Leslie Patterson Jr. passed into heaven in Durham, North Carolina on September 1, 2021 at the age of was 92.  Born in Durham, April 29, 1929, he was the only son of Frank Leslie Patterson Sr. and Novie Hamlet Patterson who predeceased him.  He was also predeceased by Clara Estelle Howard Patterson, his beloved Peg, to whom he was married 67 years.  He is survived by his children, Rebecca Patterson Jones of North Myrtle Beach;  Frank Leslie Patterson III and his wife, Cynthia, of Monroe, NC;  Robert Millard Patterson and his wife, Tracy, of Creedmoor, NC;   David Fletcher Patterson and his wife, Theresa, of Durham; and their families which include sixteen grandchildren and sixteen great-grandchildren.  He is also survived by his brother-in-law, Richard W. Howard and wife, Judith, of Goldsboro, NC, and first cousin, John T. Matthews and wife, Mary, of Mt. Airy, NC, along with numerous nieces and nephews.

Mr. Patterson attended NC State University where he majored in agriculture.  He was a veteran of the US Army, and served in the 82nd Airborne. He was a patriot.  He was a member of Mt. Moriah Baptist Church most of his life, and served as deacon and Sunday School teacher in earlier years.  He also attended Bible Baptist church and Abundant Life Church.   He was self-employed and owned a variety of businesses over the years and continued to work into his eighties.

Throughout the years, Frank and Peggy touched the lives of many people who were experiencing difficult times and provided them with shelter and a helping hand.  They were “Dad and Mom” to many and were greatly loved by all.

A Celebration of Life service will be held at Mt. Moriah Baptist Church in Durham, NC at 2:00 p.m. on Wednesday, September 8, 2021.  Visitation will be prior to the service, at 1:00 p.m.  Burial will be immediately following at the church's cemetery.

Arrangements are with Walker Funeral Home in Hillsborough, NC.

Share Your Memory of
Frank
Upload Your Memory View All Memories
Be the first to upload a memory!
Share A Memory