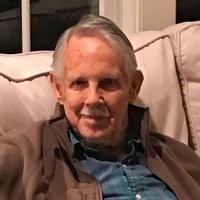 He was born October 17, 1929, in Holyoke, MA to Robert E. and Lillian Farr Bacon.  He had great pride in the area he grew up in.  Talked often of his adventures at the Holyoke Water Power Plant where his father worked.  After he graduated from Mt. Herman Preparatory School, he attended Boston Institute School of Real Estate, graduating in 1949.  Robert was drafted into the Army in 1951 and served most of this time in Newfoundland.  When stationed at Ft. Eustis, VA he met his future wife, Shirley Dodrill.  Their first date was a blind date on Valentine’s Day in 1951 and they were married in 1955.  In the early years of Techbuilt Homes, Robert worked as a salesman.  In 1959 he was one of the three that got Deck House started in Acton, MA.  He was head of sales and wrote much of the advertising in the early years of Deck House.  In 1968 the family moved to Chapel Hill, NC.  There, Robert and his business partner, Marvin Pridgen, started their own construction company.  They built Deck Houses and their own design called a Bomar.  In 1986 Bob and Shirley bought Hill Country Woodworks, which handcrafted custom furniture.  After running Hill Country Woodworks for 24 years and after 45 years in Chapel Hill, they moved back to his beloved New England in 2013.  Both living out the rest of their lives in Saco, ME.

Mr. Bacon was succeeded by his three children and spouses, Susan and Jeff Lessard of Saco, ME, Everett and Teresa Bacon of Durham, NC, and Sarah Bacon of Bynum, NC, two grandchildren and two great grandchildren.  He was preceded in death by his wife, Shirley Bacon.

A memorial service will be held on Saturday, June 26, 2021, at 3 pm at The Chapel at Walker's Funeral Home, 120 W. Franklin Street, Chapel Hill.  The family will receive friends following the service at the funeral home.

Share Your Memory of
Robert
Upload Your Memory View All Memories
Be the first to upload a memory!