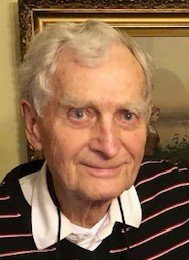 John Joseph Sneddon passed away on June 9, 2021, in Chapel Hill, North Carolina after living his life to the fullest.  A wonderful father, grandfather, uncle and friend, John lived every day with humor and a plan. Never one to look back or dwell, he looked forward with a determination and a spirit ready to embrace all that life offered.

John was born on January 21, 1932, in the Bay View neighborhood of Milwaukee, Wisconsin, the youngest of Lucile Barber and Theobald Otjen Sneddon’s three children. He grew up sailing on Lake Michigan, out of South Shore Yacht Club, with his brother, Ted, and a group of friends, with whom he stayed close to throughout their long lives.

He attended Don Bosco High School in Milwaukee and went on to the University of Wisconsin at Platteville, where he graduated with a B.S. in Food Technology, and the University of Wisconsin in Madison where he earned a master’s degree. He quickly began his career in food manufacturing and management at Holsum Foods in Milwaukee. Even when living elsewhere, Wisconsin stayed with him - he was a lifelong Badgers and Packers fan and celebrated each Rose Bowl and Super Bowl win.

John met Rosanne Finley at a friend's wedding when they were paired as wedding attendants.  Although she was engaged at the time, Rosanne fell quickly for John (and vice versa) and they were married on February 20, 1960, in Rosanne’s hometown of Lafayette, Indiana, surrounded by family and friends. By late 1964, they had welcomed two daughters – LuAnne Mary and Amy Marie.

John took pride in his long and varied career which took the family from Milwaukee to Kendallville, Indiana with Holsum, to San Francisco with Universal Foods, Chicago with Morton Salt, Indianapolis with McCormick, Baton Rouge with AMI and finally to Clearwater, Florida as a Consultant. He and Rosanne made friends wherever they went, but especially during their time in Glen Ellyn, Illinois where, as part of the “rat pack” or “terrible 10,” they formed everlasting friendships. John and Rosanne retired to Diamondhead, Mississippi where he enjoyed golfing (known to his granddaughters as his “job”), gardening, traveling, and volunteering with the Lions Club, the Food Pantry, and coordinating fundraising golf tournaments with the Men’s Club of Most Holy Trinity Catholic Church.

John is loved and missed by many, including his wife of 61 years, Rosanne; his daughters and sons-in-law, LuAnne and Don Pendergraft, of Chapel Hill, and Amy and Neal McKnight of Chicago; four granddaughters, Finley and Abby Pendergraft and Lucie and Helen McKnight, who not only admired and loved him but also called him “cool”; his sister Barbara Larsen; and numerous nieces, nephews, and friends from across the country.

A funeral Mass and celebration of John’s life will be held on Tuesday, July 20 at 10 a.m., at the St. John Fisher Chapel at St. Thomas More Church, Chapel Hill, and will also be livestreamed.

In lieu of flowers, donations in John’s name can be made to The Men’s Club of Most Holy Trinity Catholic Church https://www.mhtcatholic.org/ministries/men/ or The Hancock County Food Pantry http://www.hancockcountyfoodpantry.org/ .

The funeral mass for Mr. Sneddon can be viewed via livestream @ https://youtu.be/x1WxeVgh9hM

Share Your Memory of
John
Upload Your Memory View All Memories
Be the first to upload a memory!