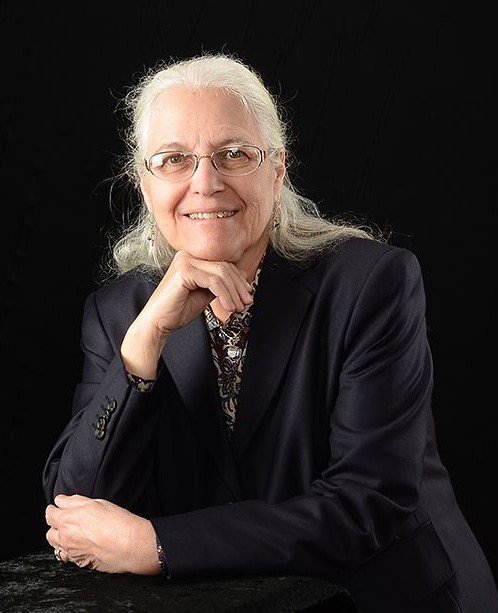 The “Rice twins” were born to Robert Bruce and Norma Elaine (Fanshier) Rice in Bartlesville, OK. Their grandfathers were oil industry pioneers:  F.E. Rice, the first engineer hired by Phillips Petroleum, retired as Vice President in charge of refining gasoline, and Chester Fanshier founded Metal Goods Manufacturing to produce the precision instruments he invented for this industry.  Their father, a mathematician and geophysicist, left Phillips in 1956 to become the first computer scientist at Marathon Oil Company Research Center in Littleton, Colorado, and soon a Department Head.

Kathryn met Kenneth Richard Bullock of Pleasant Lake, ND, at Hastings College, NB, and they married in 1967 after graduating from the University of Colorado, Boulder.  She majored in English and minored in chemistry, but when Ken started seminary in Evanston, IL, Kathryn accepted appointment as a technician to begin graduate study in Chemistry at Northwestern University (Ph.D. 1972) because the English Department there refused to fund a married woman. Her twin sister Judith (B.A. English B.S. Journalism, U. Colorado 1967; Ph.D., English literature, Indiana U., Bloomington,1974) married after securing tenure on the English faculty at the U of Saskatchewan, Canada.

Ordained as a priest, Ken returned to Colorado with Kathryn.  She began her career in battery research at Gates Rubber Company and went on to Johnson Controls in Milwaukee, WI; AT&T in Mesquite, TX: Medtronic in the Twin Cities, MN; and C&D Technologies in Blue Bell, PA. In 2003, she formed a consulting company, Coolohm, Inc., and taught courses at Villanova University. She organized chapters of the Electrochemical Society in Colorado and Wisconsin and served as the Society’s Vice President (1992) and President (1995-96). Her many awards included the Gaston Planté Medal from the Bulgarian Academy of Sciences, Deming Prize of the Japanese Union of Scientists and Engineers, Fellow of the Royal Society of Chemistry and the American Institute of Chemists. She is an author of over 60 technical papers and has 11 US patents.

Kathryn was a devoted wife and loving mother who supported her husband’s work as a priest. She believed that faith and science are compatible, and that our mission is to push back the borders of our understanding as best we can, and share that wisdom and knowledge with others.

A memorial service will be at 2 p.m. on Saturday, October 23, 2021, at the Episcopal Church of the Advocate, 8410 Merin Road, Chapel Hill, NC 27516. Kathryn’s ashes will be buried on the church grounds immediately following the service.

The service will begin with music by the Hawfields Jammers at  2:00 p.m., and the memorial service proper will begin at 2:30 p.m.

In lieu of flowers, donations may be made to www.theadvocatechurch.org, the Alzheimer’s Association (www.alz.org), or the Science History Institute (formerly the Chemical Heritage Foundation), Philadelphia, PA (www.sciencehistory.org).

Share Your Memory of
Norma
Upload Your Memory View All Memories
Be the first to upload a memory!