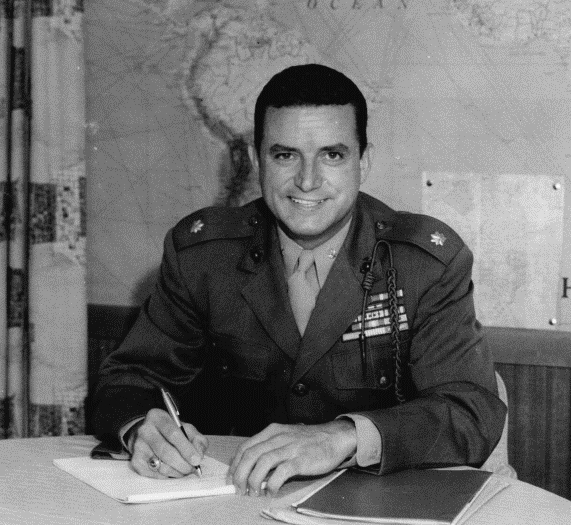 Get Directions
Thursday
20
May

Chapel Hill—Major (Ret.) Everett “Bud” Hampton, 97, died peacefully Thursday, May 13, at the VA Hospital in Durham, NC. Bud was born in Kannapolis, NC, on November 24, 1923, to the late James Riley and Minnie Baugh Hampton. He was preceded in death by his wife, Francis Thompson (Tommie), his son Mark Steven, and his daughter Debra, as well as his four brothers and one sister.

After graduating from J.W. Cannon High School in 1941, Bud joined the U.S. Marine Corps in July 1942. He was a war hero during World War II, participating in four major battles in the Pacific Theater. During the Battle of Iwo Jima, in which he was the lone survivor of his company, he assumed command after ten days of battle. He was wounded twice and eventually evacuated. He was called back into active duty in January 1951, where he was sent to Korea to assume command of Able Company in the first Marine Division.

Upon release from active duty in April 1946, Bud attended the University of North Carolina, graduating in 1950. While a junior, he married his beloved wife, Tommie. He later went on to earn his Master’s Degree in Education at East Carolina University where he assisted the university in establishing a school for marines to complete their high school education.

Among his other military duties, Bud was the Commanding Officer of recruits at Parris Island and several rifle companies, operations officer of the 6th Regiment, adjutant of the 6th Marine Corps Reserve and Recruitment District in Atlanta, and Executive Officer of the Battalion at Camp LeJeune.

For his valiant service, Bud was awarded two Bronze Stars, two Purple Hearts, as well as the South Korean Peace Medal. The discipline and patriotism he learned in the Marines never left him, as friends and family will attest.

In 1962, while aboard ship off the coast of Corsica, the director of the movie The Longest Day came aboard and requested to film landings for the movie. It was a highlight of Bud’s storied career, and he was proud to have been given the director’s chair from the movie.

Bud retired from the Marine Corps in June 1965 and went on to work for the University of North Carolina until his retirement in 1988. In 1984 he was awarded the “Order of the Long-Leaf Pine” by Governor Jim Hunt.

Bud was very active in the American Legion, Veterans of Foreign Wars, Marine Corps League, Roosters, Inc., and the Purple Heart Association. He was also a Mason and a Shriner.

Services will be held this Thursday, May 20. Visitation will be from 12:30-1:30 p.m. at Walker’s Funeral Home in Chapel Hill with a graveside service at 2:00 p.m. at Chapel Hill Memorial Cemetery on Legion Rd.

Share Your Memory of
Everett
Upload Your Memory View All Memories
Be the first to upload a memory!