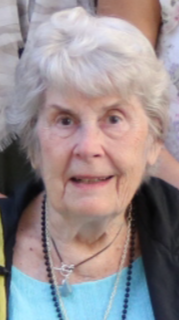 Sally was born on August 10, 1931 in Orange, New Jersey to Norman James Mallett and Irene Snyder Mallett.  She attended Briarcliff Manor Jr. College in New York state, where she met her husband, Dr. Russell F. Tomlinson, Jr. of 38 years on a blind date. They married at Wyoming Presbyterian Church in Millburn, New Jersey in 1952.  Dr. Tomlinson preceded her in death in 1990.

Sally was employed by Mrs. Helen Bagby for many years as an accompanist for her dance studio.  Sally had a passion for the piano, especially classical.  She also enjoyed her work as Volunteer Coordinator at the Chapel Hill Senior Center, where she made many lasting friendships.  Her other interests included books, needlepoint, cooking and traveling.  She especially enjoyed traveling with her sister, Janet as well and her lifelong friends Lois and Betty.  Some of her favorite trips were to Italy and France.   She spent many summers on a fishing boat untangling the line for her husband so he could pursue his passion of fishing in the lakes of Wisconsin, where countless family memories were made. In her later years, she enjoyed visits from her children and grandchildren who always came with her favorite snack: Diet Coke (with ice and a straw!) and kettle potato chips.

Sally had a very friendly personality and truly enjoyed talking to everyone!  She kept her easygoing spirit right up until the end of her life, never complaining but always offering a smile and a laugh.  She will be remembered as a wonderful wife, homemaker, mother and grandmother.

A private graveside service will be held in Chapel Hill.

Share Your Memory of
Sarah "Sally"
Upload Your Memory View All Memories
Be the first to upload a memory!