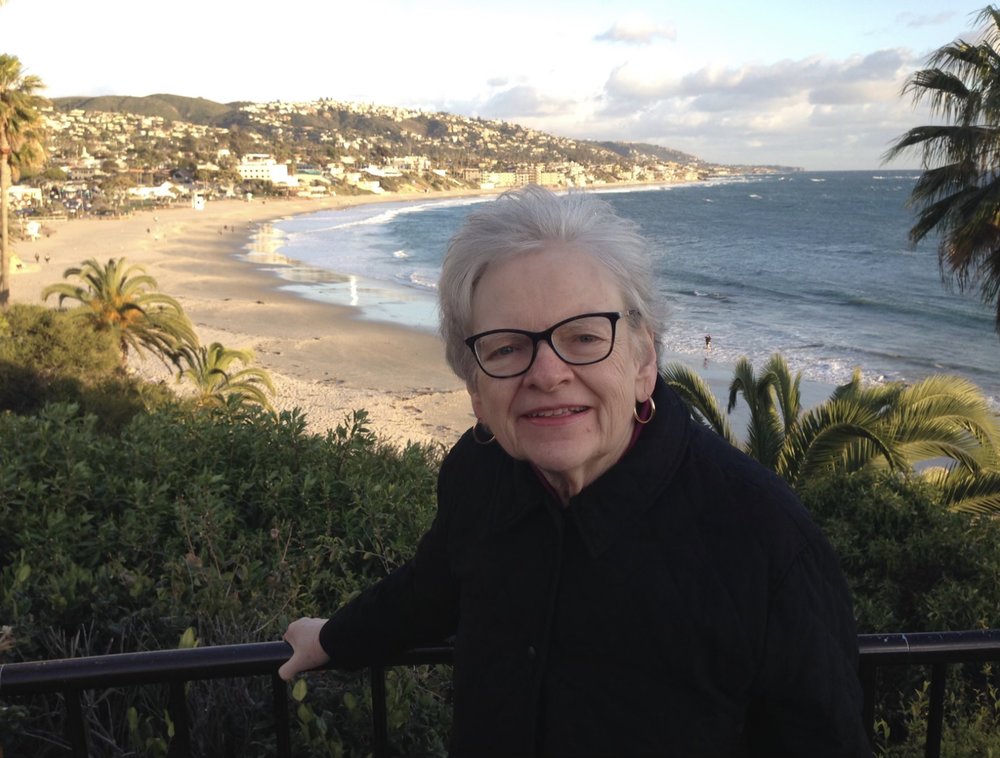 Mary Lee Barkley Ducker died at home Friday, January 8, from complications from an atypical form of Parkinson’s disease and dementia.  She was 74.  Smart, witty, loyal and compassionate, Mary was a wife, mother, grandmother, friend, and colleague whose death will create a sizable void.

Mary Lee grew up in Newton, North Carolina, where her father was a public school principal.  She was graduated from UNC-Greensboro in 1968 with a degree in English that would serve her well throughout her life.  Upon graduation she began her first of her many diverse jobs and work experiences, as an English teacher at Smith Junior High in Charlotte just after court-ordered school desegregation began in that city.  Several years later she took a summer vacation trip to the British Isles where she met her future husband, Richard, in Glasgow, Scotland, where he too was on vacation.  After returning home to North Carolina and months of a long-distance relationship, she moved to Los Angeles to be with Richard, taking a job as a market analyst for First Western Bank. In 1974 she and Richard were married and immediately moved to the Netherlands, where Richard researched the Dutch land-use controls system for the Conservation Foundation, and Mary worked as a copy editor for the Rotterdam office of Dow Chemical.   When they returned to Los Angeles two years later, Mary was hired to serve as the assistant to a nuclear disarmament expert and obtained her first top-secret security clearance.

In 1977 when Richard joined the faculty at UNC-Chapel Hill, Mary resumed teaching English in the Orange County public schools for several years.  Later, after the birth of her beloved daughter Katherine, she resumed working, this time as a conference planner, first in the UNC Kenan-Flagler Business School Executive Program and later with the computer science department.  In 1999, she began working as a tour assistant with the Chapel Hill travel company Kalos Golf, an opportunity that took her to numerous foreign countries.  In 2007 she learned that she had an atypical form of Parkinson’s, and she retired from her multi-faceted work career.

Throughout the years Mary found time to act as a counselor for a suicide prevention hotline; a volunteer at the Chapel Hill High School career information center; a member of the Board of Trustees at the United Church of Chapel Hill (eventually becoming the UCCH Church Secretary); an English tutor for adult immigrants with the Orange County Literacy Council; and the co-chair of the University Women’s Club Rotating Book Group for more years than anyone could count.  She loved classical music, especially Handel and Tchaikovsky, but could rock and roll with the best of them.   She enjoyed playing bridge with friends, as well as practicing calligraphy; examples of her calligraphy found their way onto pieces of Janet Resnik pottery.  She was an avid reader and could quote passages from books and poems long into her old age.  She also was a fan of collegiate sports, particularly UNC football and basketball.

Arrangements are being handled by Walker Funeral Home in Mebane.  A memorial service at the United Church of Chapel Hill will be planned for a later date.

In lieu of flowers, contributions may be made to United Church of Chapel Hill, to the Charles House eldercare center in Chapel Hill that she enjoyed for several years, and to the national neurodegenerative research organization CurePSP.

Share Your Memory of
Mary
Upload Your Memory View All Memories
Be the first to upload a memory!
Share A Memory
Plant a Tree