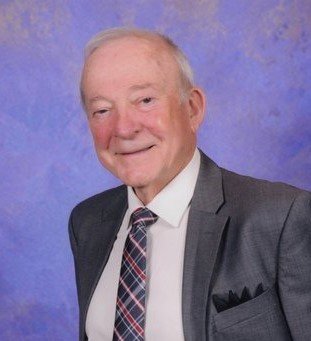 Don (Donovan) Floyd Diehl passed away on October 30, 2019 at his home in Chapel Hill, NC after a brief but intense battle with brain cancer at the age of 82.

In 1966 Don married Joan Houske Besner and became an instant father to three children.  He jumped right in and enjoyed coaching little league and playing any and all sports as much as possible with the kids, reflective of the big kid he was at heart.  In 1969 the family moved to Torrance, CA where he lived until 1992. During this time many long lasting friendships were made that remained until his passing.  Don was known around the Redbeam Avenue neighborhood for his jokes and laughter by adults and kids alike and for his annual appearance as Santa on Christmas Eve.

After leaving Torrance, Don briefly resided in Placentia, Murrieta and Canyon Lake, CA and Houston, TX.  In 2002 Don reunited with Ames High school classmate Cheryl Webb Junkmann and moved to Chapel Hill, NC.  They enjoyed many years of golfing, RV’ing and traveling the world while living on the picturesque golf course in Governors Club.  Of course, Don made several friends there and was known for his sense of humor and as a regular in the fitness center.

Don was preceded in death by his mother Mildred Diehl and father Ernest Diehl of Ames, IA and brother Douglas Diehl of Nevada, IA.

Don will be cremated and buried at Ames Municipal Cemetery in Ames, IA.  No services are being held by his request; however, tributes and fond memories of Don can be left at www.walkersfuneralservice.com and would be greatly appreciated.  Donations in Don’s memory can be made to Beyond our Borders, c/o Christ United Methodist Church, 800 Market Street, Chapel Hill, NC 27516 www.christmethodist.org  or www.KeysofChangeUSA.org .

Walker's Funeral Home of Chapel Hill has been entrusted to care for the Diehl family.

Share Your Memory of
Donovan
Upload Your Memory View All Memories
Be the first to upload a memory!