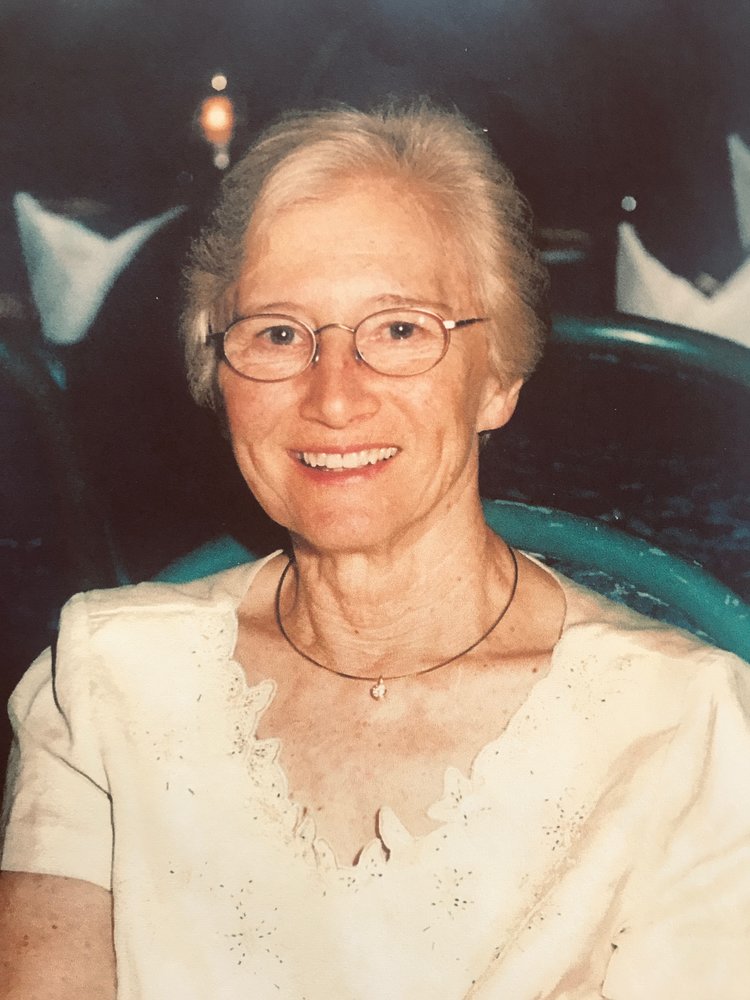 “And just at the moment when someone at my side says, ‘There she goes!’ There are other eyes watching her coming and other voices ready to take up the glad shout, ‘Here she comes!’” - Henry Van Dyke

Lucy Jo Jackson was born on February 3,1935 in Berwyn, Illinois to the late Edith Marguerite Pope Jackson and Arthur Edward Jackson, Jr. In 1941 her family moved to Mount Tabor, New Jersey where she and her brother, the late Walter S. Jackson, were raised. At the age of 13, Lucy went off to Northfield, an all girls boarding school in Massachusetts, where she graduated in 1952. Lucy attended Oberlin College and Northwestern University and graduated in 1956. Lucy began teaching English, speech, and drama at Falls Church High School in Falls Church, Virginia. This is where she would soon meet her husband of 55 years, Frank Emile de Monchaux, after being set up on a blind-date with Frank by her father.

On March 21, 1959, Frank and Lucy were married in Harwinton, Connecticut and moved to Los Angeles, California where their first child, Wendy Lynne de Monchaux was born on November 3, 1959. In 1962 they moved to Woodbury, Connecticut, and soon afterward, in 1964, the young family relocated to Mound, Minnesota where their second daughter, Leslie Carol de Monchaux was born on March 28, 1968. This is where the de Monchaux family lived for 23 years in the same home on Lake Minnetonka. Lucy was a stay-at-home mother until Leslie started Kindergarten, at which time she became a Real Estate Agent and began her 30-year career selling real estate in Minnesota and continuing with Eunice Brock and Associates, Tony Hall and Associates, and retiring from Franklin Street Realty in 2011. Lucy and Frank came to Chapel Hill, North Carolina to semi-retire in 1989 and became active members of their church community at United Church of Chapel Hill and served on numerous committees.

Lucy was a vivacious, radiant, dedicated and loving daughter, wife, mother and grandmother. She loved having conversations with family, friends and even strangers and she was never shy about sharing her opinion on just about anything. She chose “Hug” for her license plate because she believed everyone should give and receive more hugs. Lucy loved spending time with her family and friends vacationing every summer of her 84 years in Frankfort, Michigan. Lucy especially enjoyed spending time with her family and friends watching sunsets, sailing in the Caribbean, traveling, going on cruises, singing show tunes, attending concerts, theatre and movies, feeding the birds and the deer, going to her Bible study groups and singing in her church choir at both the United Church of Chapel Hill and the Congregational Summer Assembly in Pilgrim, Michigan. Lucy always put family first and she dedicated her life to loving her family, friends and her pets (Zach and Kiki).

In addition to her husband, parents, and brother, Lucy was preceded in death by her daughter, Wendy Lynne de Monchaux MacWilliams.

A memorial service and reception will be held on Saturday, June 1, 2019 at 2:00 p.m. at United Church of Chapel Hill in Chapel Hill, North Carolina.

The de Monchaux family is under the care of Walker's Funeral Home of Chapel Hill.  Please express your online condolence by using the tab below.

Share Your Memory of
Lucy
Upload Your Memory View All Memories
Be the first to upload a memory!
Share A Memory
Plant a Tree