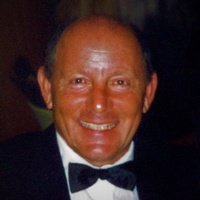 GEORGE, Dr. Sabah – of Durham, NC, formerly of Davison, MI, age 80, passed away February 10, 2019 at DuBose Health Center in Chapel Hill, NC. A Funeral Mass will be celebrated 11 AM Saturday, February 23, 2019 at St. John the Evangelist Catholic Church, 404 N. Dayton St., Davison, MI 48423; Rev. Fr. Andrew A. Czajkowski celebrant. Burial will be in St. John Catholic Cemetery. There will be one hour of visitation prior to the Mass on Saturday at church.

Sabah Kamil George was born in Baghdad, Iraq on December 11, 1938, the 5th of six children. In school, he excelled at drama and stage acting to such a degree, it enhanced his ability to memorize and tell more golf jokes than any other human alive. Sabah aspired to be a doctor, which meant many long years reading arcane textbooks and attending difficult classes. It paid off, for by his early 20s he was a young doctor working for the Iraqi Petroleum company. A good-looking man on a physician’s income, every family practically stood in line to introduce him to their eligible daughters. However, Sabah remembered the words of his Catholic Jesuit teachers who told him, “This might look like the land of milk and honey, but trust us, you must go to America.”

Dr. George arrived in Detroit, MI in 1964, armed with his Baghdad college education, but with a strong desire to become an American. His first purchase, a Ford Mustang, helped that process along considerably. At Henry Ford hospital in Detroit where he trained to be an anesthesiologist, he fell in love with Anne Jarkowski, a red-headed Catholic girl from a nice Polish family who narrowly escaped the Nazi death camps in WW2.  Francis Brian George, their only son, was born in 1970. Dr. George was overjoyed. So much so, in fact, that one day when Francis was old enough, he asked his father, “Dad, why are you always hugging and kissing me? No one’s father does that!” He replied, “Son, my father was a loving man, but hugs and kisses weren’t his thing. I promised myself that if I ever had a son, I would shower him with affection.” While Dr. George was doing well in America, he couldn’t live with the fact the rest of his family was still in Iraq. For the next several years, he worked tirelessly and courageously to legally immigrate them all to the United States. This included his brothers and sisters, William, his kids Deena, Ghadeer and Gaith, Leila and her son Louie, along with Victoria and her young children Zina, Harith, Issmat and Maha, and his little brother, Namir.

His parents finally arrived in 1978, and he bought them a little house in Davison on Gary Ray Dr. and Oda St., along with a tiny white poodle named Pépé, who literally barked at anything that moved. Two generations of our family since have been born here as American citizens, all secure and thriving in their American way of life.

Dr. George had the brightest eyes that were either full of love, laughter, or a combination of the two. He always had a smile on his face, and if he didn’t, it was often Francis’ fault, who, for many years, thought his name was “Ismal,” (the Arabic word for donkey) for Dr. George could often be heard saying, “Ismal! Put down that vase!” or “Ismal! What are you doing to Pépé?!”

Many years of Dr. George’s life were spent in Davison, where he was active with the church and community. He had a strong Christian faith; he worshipped Mass every day. They lived in a Davison neighborhood where everybody knew everybody. There was a big reason for that - the George’s parties. Legendary in size, scope and creativity, the Georges spared no effort welcoming their friends and family in terms of music, beverages, and other party-enhancing favors, including, but not limited to, belly dancers, disco balls, hay bales, kegs, live chickens, staged poetry readings, and limbo contests. Dr. George loved dancing and music; he played the violin, piano, cello and drums, and had plenty of them lying around for visitors to play during impromptu parties.

At the age of 47, he retired from full-time work, and purchased a large boat. When asked why, he would recall a boat show he attended with Anne while they were dating, featuring the most beautiful boats, piloted by men so advanced in age they could barely walk. He promised himself then and there he would buy such a boat while he was young enough to enjoy it. And enjoy it he did, along with single-engine airplanes; he boated and flew across the entire United States and Canada many times over.

After a successful career as an anesthesiologist, Dr. George wanted to give back to the country that provided so much for him and his family. He joined the U.S. Navy in 1990, and worked in numerous Naval Hospitals across the East Coast, being promoted to the rank of Commander.

Later in life, he was diagnosed with Parkinson’s disease. In 2012, it had advanced to the point that McLaren hospital in Flint recommended Sabah be committed to a state-run nursing home, for his wife Anne was too frail to take care of him. Later that week, his son Francis moved Sabah and Anne to a retirement community in Durham, NC, just down the street from where he, his wife JiNan, and their two kids lived. Dr. George was able to attend his only son’s wedding, and for many years afterwards, live happily in a wonderful community where they got to see their son and his family almost every day.

Sabah is loved, celebrated and survived by his wife, Anne; his son, Francis and his wife JiNan; his siblings, Namir and Leila; along with his beloved nieces and nephews, Zina, Maha, Issmat, Harith, Ghader, John, Sermed, Serur, Saad, Suha, Louie, Chris, Kevin and all their beautiful children.

His life was a blessing to generations.  Online condolences may be submitted at www.allenfuneralhomeinc.com.