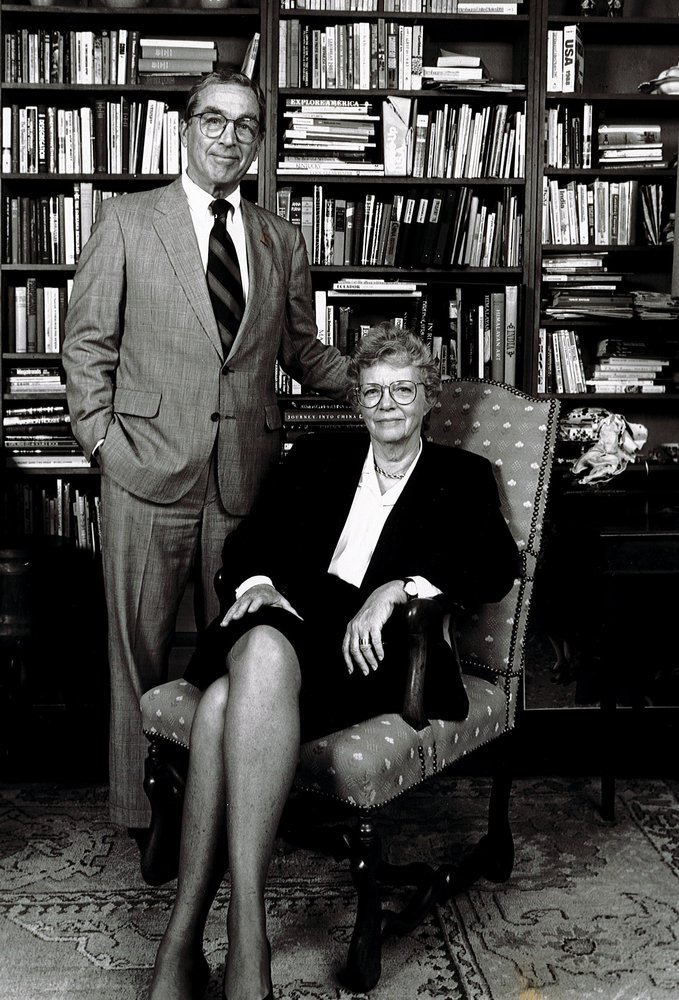 “The only time to eat diet food is while you’re waiting for the steak to cook.”

Mary Hill loved three things more than anything else: Watts Hill Jr., her children, and her dogs. Outside of her immediate family, Mary especially enjoyed cooking and traveling with friends. She died on Feb 1, 2019, after a full life.

Born to Richard H. Lamberton and Eliza Drake Lamberton, Mary grew up in Franklin, PA, headed to the Madeira School where she crossed paths with Watts Hill, Jr. at age 16. Subsequently, she left Vassar as a young newlywed to move to Geneva, Switzerland, where she learned to cook. After two years, Watts and Mary moved to New York City where she worked as a comparison shopper for Macy’s.

The Hills finally settled in North Carolina where Mary raised two children and more than a little hell, with at least one dog under foot at all times. She also continued her interest

in retail by being a buyer for Montaldo’s and opening her own gift store, The Secret Garden. Mary was active in the arts and the environmental community and both she and Watts donated their time and gifts to the Environmental Defense of North Carolina, UNC Institute for the Environment, North Carolina Museum of Art, the Fund for Human Possibility and, in Maine where they had a second home, the Island Institute. Mary served many years on the Board of the Triangle Community Foundation, ultimately becoming its president; she remained on their Leadership Council until her death.

Watts Hill, Jr. preceded her in death in 2002. She missed him terribly and never forgave him for that.

Her brother Richard D. Lamberton (Barbara) in Lake Oswego, OR, and a niece and nephew, also survive her.

Finally, Mary is survived by Breezie, her last rescue dog.

Mary had many wonderful friends, too many to name here, but they definitely added to her wonderful life.

Mary was fortunate to be surrounded everyday by wonderful caring companions from Helping Hand and Aegis and Rausa McManus.

A private interment will be held on Feb 17th. A reception for friends and family will follow at her home in Chapel Hill, from 4-6 PM.

In lieu of flowers, Mary would appreciate sending donations to your favorite Democrat, the North Carolina Museum of Art, or the Fund for Human Possibility, P.O. Box 331, Chapel Hill, NC 27514.

Arrangements are under the care of Walker Funeral Home, Chapel Hill, NC.  Please express your online condolences by using the tab below.

Share Your Memory of
Mary
Upload Your Memory View All Memories
Be the first to upload a memory!
Share A Memory
Plant a Tree