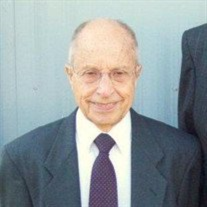 Robert was born February 18, 1927 to Henry Clay Johnson, Sr. and Ethel Miller Johnson of the Schley Community.  He was a graduate of the 1945 class of Hillsboro High School, Hillsborough, NC where he served as secretary of the junior and senior classes.  He served in the US Army after WWII, being stationed in Japan. Afterwards he continued in the farming business.  Robert attended King’s Business College in Greensboro, NC, before devoting the rest of his life to the ministry.  As a minister, he worked in several states and touched many lives.

He is survived by sisters- in- law, nieces and nephews, and by numerous friends and co-workers. Robert was preceded in death by his parents and his five brothers:  Henry Clay Johnson, Jr.; James Johnson; Ned Johnson; Samuel Johnson; and Phillip Johnson.

The Johnson family is under the care of Walker's Funeral Home of Hillsborough.