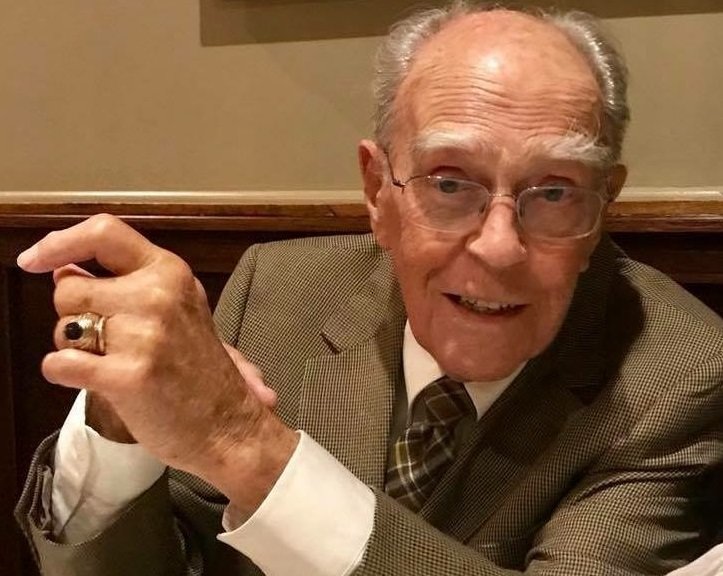 Born and raised in Louisville, Kentucky.

Attended two years at the University of Kentucky.

Out of the Navy, Richard began his career as an engineer with Chrysler. We can thank him for the radios in our cars today. He created the prototype and pursued the development of it.

Chrysler Missile transferred Richard from Detroit to Huntsville, Alabama and Redstone Arsenal. At Redstone, Richard worked along side Wernher von Braun in missile development and was instrumental in the design and development of our first rocket launched in to space!  Richard left Chrysler Missile to pursue his Doctorate in Biomedical Engineering at IJNC, Chapel Hill, N. C., in 1968. This prayerful decision to leave a secure job and friends deepened his walk with his Lord and proved to definitely be God's plan. Richard's dissertation was the discovery of how to measure the viscosity of blood flow in the capillaries. Dr. Scearce ended up, at the age of 48, in the field that was his gift, medicine and engineering. Many of today's technological advances in medicine are the result of his work using NASA technology to solve problems in the medical field.

Richard's life was devoted to God, family, and country. He was a God and Country recipient, an Eagle Scout, Boy Scout leader, Neighborhood Commissioner, and a District Boy Scout Commissioner. His desire to teach and serve teenagers and young adults continued with his wife, Margaret, of 64 years, through their church and Young Life for decades. Richard and Margaret have mentored and counseled countless people of all ages, single and married, sharing their faith and wisdom without reproach.  The wealth of knowledge that Dr. Scearce had will surely be missed! He overwhelmed people with his genius mind and his incredible memory. Richard loved to talk and tell stories! He never met a stranger! Wherever he went he usually found someone that wanted to listen and learn!

Dr. Scearce married the love of his life, his childhood sweethealt (he was her paperboy!)! They have three children, Richard Ward Scearce,lll, Gail Scearce Hughes, and Linda Scearce Galloway. There are five grandchildren and three great grandchildren.  Richard loved God and followed Him with an unwavering trust and obedience! Although his life took many twist and turns, Richard was always able to thank God for everything that happened, because he knew that God was in control! Richard loved The Lord Jesus Christ with all of his heart, soul, and mind and his heart's desire was to hear his Savior say, "Well done, My good and faithful servant!"! For those that knew Richard, they know that he has heard those precious words from his Lord!  Please join the family to celebrate Richard's life and the Hope in seeing him again!  Saturday, December 16, 2017 12:30

Family will be receiving people in the Fellowship Hall from 11:00 - 12:00 at Blacknall Memorial Church in Durham, NC

Share Your Memory of
Dr. Richard
Upload Your Memory View All Memories
Be the first to upload a memory!
Share A Memory
Plant a Tree