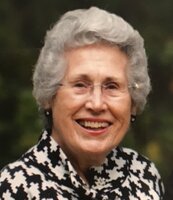 Annis was born July 31, 1928 in Sanford, North Carolina.  The daughter of Fisher and Gladys Kelly Wicker, she was raised in Sanford among large extended families.  While attending Rex Hospital School of Nursing her father died, but she graduated in 1949 and remained in the Raleigh area working for an Ob/Gyn practice.

After a blind date that led to a 3-month courtship, she married Morris Edward McCrary, Jr. on Sept 20, 1952 - a lifetime commitment that ended too quickly when he passed away in 1986.

Annis supported her husband through his undergraduate and master’s program at UNC by working on the Ob/Gyn service of UNC Hospital. They lived in married student housing which was refurbished Army barracks, across from the hospital on Mason Farm Rd.  Their first child, Mac, was born in 1955 on the day her husband graduated.

Always following her husband’s lead, the family moved to Charlotte, NC where her Morris’s job required traveling.  Annis did not enjoy being left at home without transportation, so the next move was to Charleston, SC where their second child, Nancy, was born.  In 1960 they moved to Roanoke, VA where she grew to love the mountains and had their third child, Julie.

Annis continued night and weekend private duty nursing for Roanoke Memorial Hospital until tending to her own children became the priority in her life.  She insisted that the family travel back to NC as often as possible to visit relatives.

Traveling was her passion.   Her travels took her near and far with friends, nieces, nephews, as well as children and grandchildren. She considered traveling the best learning experience anyone could have.

A celebration of life for immediate family members will be held at a future date. Online condolences may be shared with the family at www.walkersfuneralservice.com.

In lieu of flowers, memorial contributions can be made to the Shallow Well Church, 1220 Broadway Road, Sanford, NC, 27332.